New Year's here involves many holidays, including several jammed together between December 28 and January 4 (more or less), when things are closed, and discounts for trains and hotels temporarily disappear since people are traveling to go on visits and people hurry to accumulate "firsts."

New Year's Eve is called Omisoka in Japan. Dinner often includes toshikoshi soba, where the length of the noodles is held to promote long life. This can be eaten any time during the evening and is often eaten close to midnight. Mochi's popular, too, and altar sets of two cakes of fresh mochi, one atop the other with a mikan tangerine on top are usual in Temples, Shrines and in homes. Many people visit a Temple or Shrine for a midnight celebration that includes the ringing of bells, if they have them. Temple bells usually ring 108 times, joya no kane, to cleanse the 108 earthly desires, for a fresh start for the new year. 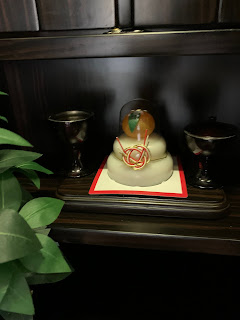 A tiny set of mochi, called kagamimochi, topped with a tiny mikan, on my altar. These, in all sizes, are available everywhere. They are wrapped to keep the mochi from spoiling until it's time to eat it. It's also possible to get versions topped with figurines representing the Chinese Zodiac animal of the new year. This year, it's the Hare, so adorable bunnies are everywhere. I'm accumulating a tiny collection. Those who wish can make their own mochi, and the large sets in Temples or Shrines are handmade, by staff, members or a specialty shop. 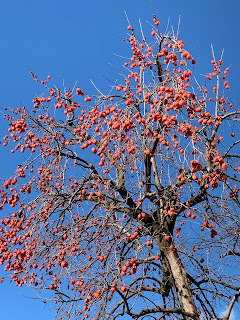 Gantan (New Year's Day) services are often held right at midnight, and again right through the day. This "first" visit of the year is important and people make efforts to attend. Because of COVID, my Temple had many services over several days, more than usual, so everybody who wanted could come without overcrowding. One normally makes a donation to any Temple or Shrine one visits for such a ceremony. In addition to a little piece of dried kombu or kelp, a small snack given for refreshment and energy to keep going through the night to accumulate more "firsts," often starting with the first the sunrise, a small gift is presented, often of salt.

Salt has a special meaning in Japan because of its use in ritual cleansing, so a few ounces of really nice salt is a culturally significant and special gift.  My Temple also gives out really good calendars with all the civil and Buddhist holidays and festivals on them and beautiful photographs, too, but I doubt that's universal.

People order Oeshici -- special New Year's food -- rather than cook it, usually, the idea being that it's eaten over the first three days of the year, the food is highly symbolic, and varies, though shrimp are common. Ozoni is a special New Year's day soup that varies from family to family and region to region, though mochi is usually served in it. Stretchy mochi is also symbolic of longevity. Persimmons are usually harvested and dried outside by stringing them on porches, but those pictured above have dried, beautifully, on the tree, and are probably ready to eat. One kind of persimmon isn't eaten until it's dried because it's not sweet until very, very sloppily ripe. Dried is better. In Nichiren Shoshu, we usually also make a New Year's pilgrimage to our Head Temple, Taisekiji, for ceremonies that cannot be performed elsewhere, another in a series of "firsts." These pilgrimage trips are specially scheduled through the first week of the new year, to make sure everybody can come. It's very crowded this year because people have been cautious over the past couple of years and capacity is limited for the same reason, meaning more services are scheduled over more days. 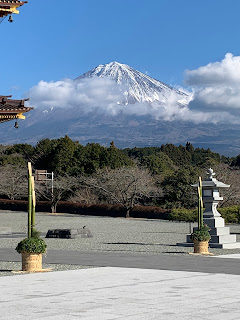 Even Buddhist Temples participate in what are culturally significant New Year's decorations. Here, at Taisekiji, kadomatsu arrangements of pine, bamboo and plum are placed outside the various gates to and on the Temple grounds, decorated with straw rope, shimekazari. Variations will be seen everywhere. The door of my mansion (condo building) has them and people, including me, have small versions on their doors, too.

We aren't done! The second Monday in January is Coming of Age day, when the young people who turn twenty will frequently be formally presented at their family Temple or Shrine, dress up in formal Japanese wear for photographs, go visit various large Shrines and/or Temples, usually with friends, and then go out and party, because twenty is the legal drinking age in Japan. The formal wear is often rented, but sometimes not: this can be a gift for a young man or woman of their first adult formal costume, which will likely last them the rest of their lives. A girl may received another on her wedding, as women's clothing changes on marriage or with age, with patterns becoming simpler, more subdued, more elegant and the sleeves becoming shorter.

Finally, the season ends about January 15, when the mochi is finally taken down and eaten, often with red beans in a kind of stew, and the decorations are put away. Many decorations and Shinto amulets are taken to Shrines to be ceremonially burned, and the amulets (health, safety, success, or whatever you like; they have many) are usually replaced. If you're in the right place at the right time, there's a special breakfast at Taisekiji that you might get invited to attend.

It's not quite over yet! Lunar New Year is still to come. This is a very quiet celebration, but it is celebrated, this year on January 22. Again, friend and family visits are in order, special meals, Temple or Shrine visits, and this may be when children get red envelopes with gifts of crisp new bills from grandparents or other relatives, if the family likes to do it for Lunar rather than Solar new year. Sometimes, of course, they do both.

I wish everyone a most wonderful new year. Twice.

Posted by Claire Youmans Author at 8:20 PM No comments: