Nikko is an incredible resort area. It's stuffed with history, sights to see, fabulous views, things to do, and one could spend a week or more just touring the most must-see world heritage sites.

I just got back from a few days in Nikko. What did I do? Nothing!

Gableview Forest Inn is well-located, comfortable, clean, pleasant, and run by delightful hosts I like very much. Most of the long weekend I spent ensconced in a recliner, watching a tiny and unobtrusive (didn't stick) snow fall, listening to music, chatting with Elizabeth, the Canadian half of the owners, and reading a real hard-copy book that I've been putting off reading for a long time, since I have no place at home to easily read real books. And when I wasn't doing that, or soaking in the baths (there are several to choose from, indoor and outdoor, and a new-to-me stone one that I enjoyed; yes, you can reserve one to yourself) I was enjoying the truly fabulous cuisine of Satoshi, the Japanese half of the owners.

I feel like I have a place in the mountains where I can go whenever I want, settle in comfortably, do as much or as little as I like, take advantage of the wonderland that is Nikko or just relax in the warmth of their welcome.

But when I say I did nothing, I don't mean really nothing. I did finish my book and cogitated on my next book, after the forthcoming The Reluctant Dragon, and that was my actual goal. I also got to go to a delightful  farmers' market where fantastic and truly local produce is available and the community enjoys the large park. While there are some handcrafts and prepared things, it's not all craft-fair. This is where you (and Satoshi) can buy actual food. I wish I could have taken a grocery cart to bring more home than I did.

The train the goes to Nikko splits at Shimo-Imaichi. One half goes to Tobu Nikko station. The other half goes to Kinagawa Onsen and beyond. This is a separate part of Nikko known for onsen resorts, outdoor sports and scenery rather than history. But at Shimo-Imaichi station, where the train splits, you can, for a paltry sum, go to Kinagawa Onsen on the Taiju Steam Train! It takes less than an hour -- I wish it was longer. Then you can come back to Shimo-Imaichi and switch to another train to get to Tobu Nikko Station proper, if that's where you're going. That takes only about fifteen minutes.  From the Steam Train, if you want to, you can stop at Edomura Wonderland (a really excellent Edo Period theme park I've mentioned previously) or Tobu World Square (a miniature of famous architectural sites around the world I haven't visited yet). There are also buses from the station plaza in Nikko proper to those attractions.

But, of course, I had to ride that train. 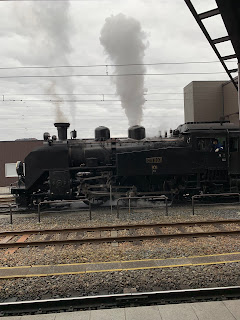 It's hard to explain the allure of the steam trains (or the special sightseeing trains even if they aren't the old-fashioned steam ones). The operators do magic things to keep the pollution down, I understand, so you don't really have to worry about that, but the trains do have the old fashioned steam whistles and billow steam out in the best Hogwart's Express tradition.
Once you ride one, you understand the attraction. They are great fun! Everybody smiles! People on the platforms take pictures. Children dance about, nearly bursting with excitement! As you pass office buildings, on the way out of town, people come to the windows and wave. The crew point out scenic vistas, and the trains usually slow to allow for views and photos. Any time you pass a station, people on the platforms wave. People on the route come out of their houses. Farmers stop what they're doing in the fields. People at road crossings get out of their cars.  Everybody waves. Everybody smiles.
Before you know it, you're smiling, too. You smile every single time you see one of these great attractions and ride one whenever you can. Not to be missed, I promise. 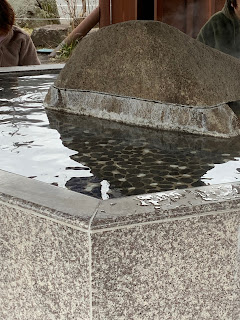 At Kinugawa Onsen, there's a public foot bath in the square outside the station. There's a lot of walking and hiking in the area, so your feet might long for this, but it's fun just to pull off your shoes and socks, roll up your trousers and settle in to enjoy a hot spring while watching the world go by.
Like this Golden Oni does. This statue is the official welcoming committee, just outside the station doors. How can you go wrong with a Golden Oni?
While the train to Nikko is very nice and Nikko is only a couple of hours from Tokyo, the vastness of Tokyo means that getting to that train can take longer than getting to Nikko itself. 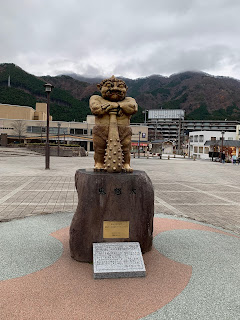 So it took me much longer than I would wish to get home, with more train changes and more stairs and two separate places where I always get confused. But I made it. 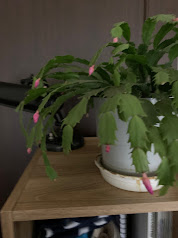 I found my holiday cactus readying itself for its second major bloom, and if you look very carefully, you can see the tiniest buds preparing for the third bloom!  It also has some new progeny outdoors that are also preparing to bloom. Those were grown from pieces broken from this mother plant last year. I am shocked that they are going to bloom at all! 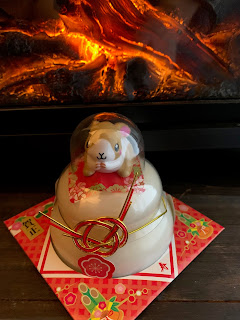 And this is my New Year's Bunny. It's going to be Year of the Rabbit (or hare, depending on how you translate it). Bunny's forepaws are in the gassho position in front -- you can also get a waving bunny -- and while it's in front of my fake fire now, it will soon move to my Buddhist altar as we await the solstice, the Solar New Year, and ultimately the Lunar New year.

Enjoy the season, everyone!