Nobody knows why -- there is no real clear or obvious reason for it -- but I have been having some physical problems lately. After I had my super-strength flu vaccine I was suddenly slammed with serious muscle and joint pain. I haven't been walking well or quickly. The idea of getting down on the floor has been laughable. I've done what I must and some of what I wanted. I have exercises and physical therapy and it has been getting better. Until COVID Vaccine, Part 5, when it crashed again, pointing to the possibility that what I've been experiencing, which fits one of the side-effect profiles for both vaccines, might be exactly that. It's one of those things where the cure for all of the possibilities is exactly the same, so I just keep doing that PT, and will wait it out. This, too, of course, shall pass.

Everybody knows I enjoy cooking, and as a veg, I very often have to cook if I want to eat. There just isn't that much available in nearby restaurants, or even for delivery, that I can eat.

But I haven't been able to cook.

It's also the holidays. As a Buddhist, I naturally don't celebrate a Religious Christmas. I'm also not going to trek around Japan looking for Santa and Reindeer and Krampus -- all the manifestations Secular Christmas co-opted from Pagan Solstice Ceremonies. It feels odd to me, too intertwined with the religious holiday of a religion that isn't mine. I don't want to go to the various gaijin parties featuring foods I can't eat, either. Few people can entertain at home, so these are often held at hotels and restaurants and western-themed taverns and bars, and are not free.

I do enjoy the Illumination lights and light shows that spectacularly brighten much of Tokyo and other parts of Japan. These are everywhere, and will usually stay up until mid-to-late January.  This is a resin -- no water or power required -- skating rink outside of Tokyo station. It just opened when I got this picture and reservations were required. I didn't have one, and it would have been idiotic to try skating under the circumstances. I am stupid enough to try it, but the fates were wiser than I am. 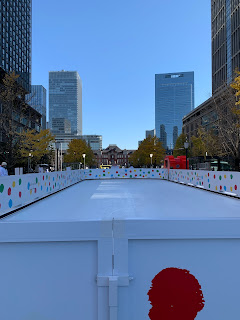 The holiday party season here starts in early December with end-of-year bashes, and will wind up with the religious and cultural New Year's season, where people visit family, visit Temples and Shrines, enjoy the numerous holidays during the lengthy festive period and, naturally, eat. 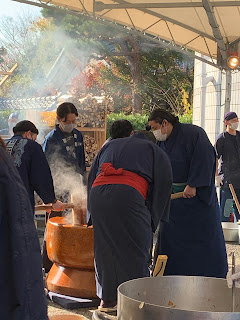 From an End of Year party, where mochi is made by hand, in this picture by sumo wrestlers. It was delicious. 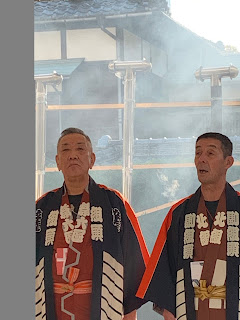 This group of traditional singers performed original music, wonderfully. These parties can be a great time; this one certainly was.
Solstice, or Toji, is celebrated in Japan, but while that is celebrated, often with a long, hot bath with yuzu (an aromatic citrus) and onsen visits, and people also eat Japanese pumpkin to warm the body and soul and stave off colds, it's a quiet festivity.  It is the start of the ramp-up to New Year's, which is the huge winter celebration that involves family visits, ceremonies at Temples and Shrines, travel, cards mailed at special rates and astoundingly delivered on New Year's Day, and every bit of holiday fun one might imagine.
Japan's unique version of Christmas falls right in here. It's not a holiday, but the traditional meal is Kentucky Fried Chicken, and a Victoria Sponge Cake with hot-house strawberries.  Sometimes, there's a buche de Noel. Small toys might be given to little children in a new adaptation. Since the Colonel wears a Santa suit, it kind of makes sense. It's a great date night. Japan does love a party.
For solar New Year's, of course, there is lots and lots of food, ordered a month or more in advance. Osechi ryori, it's called, and many of the dishes are symbolic, including soup, mochi, vegetables and seafood.
But I wanted traditional-to-me food, and today I was able to go to the store as part of running some errands. My haul will let me make a chestnut dressing casserole, probably with apple in it as well as fu (Japanese wheat gluten protein), a pear salad, roasted potatoes (with the same gravy I'll make for the dressing)  and a sweet potato roasted at the store that will need no embellishment at all. 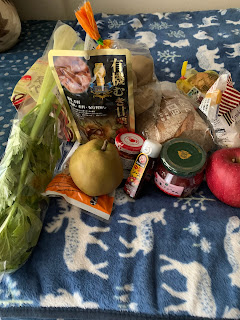 The fabulous Punk-Doily bakery has sent me a few traditional-for-me desserts in individual portions, and the entire meal will be spread, happily, over at least a week.
Food ways are part of our cultural heritages and our cultural traditions, associated with holidays, celebrations and fun. I'm very glad I can make some of mine again this year.
Happy holidays, everybody.

Posted by Claire Youmans Author at 12:55 AM