One of the great things about Japan is that, no matter how obscure your interests, there will be groups and clubs that support it.

Like steam trains? Ferry boats? Fishing for BIG fish? Fishing for TINY fish? Raising beautiful fish? Hiking? Cooking in infinite permutations? Climbing? Go? Variations on gardening? Bridge? Competitive  chrysanthemum growing? Watercolors? Saxophone practice with strangers in parks (since this instrument, in particular, cannot be played into head phones for non-neighbor-annoying practice sessions)? ANYTHING you can think of, there will be other people who enjoy it and all you have to do is seek them out.

Many of a subset of MY people, the boat-ride loving types, rode ferries from Nagoya to Tomokami and back with me last week, taking advantage of the Silver Week holiday despite two typhoons and lots of pouring rain.

A large group brought their motorcycles. One of my cabin-mates, I saw -- recognizing her from her helmet -- has a particularly slick BMW, street-legal but with nice fat tires. When we boarded in Tomokami, in the pouring rain, the motorcyclists were all just soaked and miserable looking. Not a week for motorcycling, though some days were nice enough. By the time we returned to Nagoya, it was lovely out, of course, and they roared off, dried, laundered (there is a coin laundry on board) warmly soaked in the Grand Baths (Sentos with sea views; everybody loves them) and well fed (the buffets in the restaurant were sumptuous, even for me, though some people prefer to bring cup-noodle type provender) and seemingly quite content. 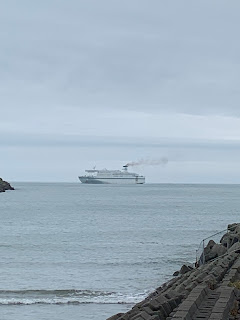 A sister-ship of the ferry I came in on, possibly the one I went out on. There are three that ply this route in turn. They are not identical, but pretty close. They are cargo ships, but also have some room for boat-loving passengers, including campers, bikers, car drivers and more, in addition to the people who drive the container-carrying trucks that form most of their cargo. 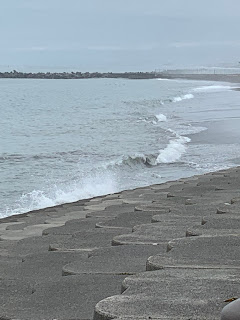 The beach where I took the boat photo. Beach walking was something I've been wanting to do all summer. Grey, drizzly days reminded me of the Oregon coast. In fact, this whole area reminds me of the northern Oregon coast and I like it very much. 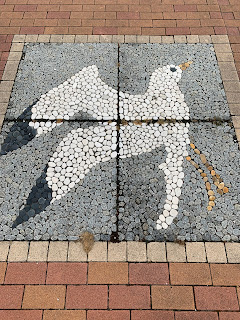 The promenade above the waterline features stone mosaics at regular intervals, like this one. 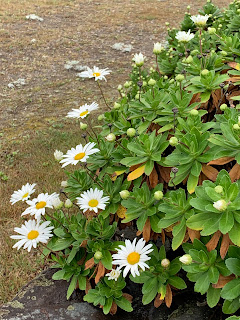 And plenty of interesting flowers. I didn't recognize this one. Also huge brambles of wild roses that, now, simply sport their autumn rose hips.
One very wet day I went to the Upopoy Ainu Museum and Park. It's new, and because of interior restrictions and exterior rain, I don't have photos, but it is worth the trip. It was very crowded due to a new exhibit. It is truly a superb museum with cultural experiences and a model villages available. It preserves art, language, culture, music and dance. The connections with the peoples on the West Coast of North America are not only there, but shown. Definitely worth the trip, and plan on two days. 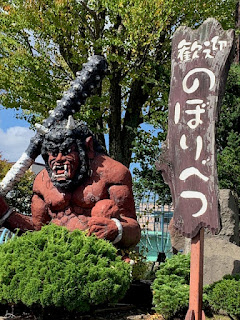 The nature reserve I wanted to visit was not open on a day when it wasn't pouring, so I went to Noboribetsu instead. A hot spring resort with significant volcanic activity, it's the location of one of the Gates of Hell -- there are several -- which are guarded by Oni. Oni might be demons or might be something else. It's where Kukanko's people from The Oni's Shamisen migrated.
Kukanko herself is sure they are not demons, and explains a bit about how their legends might have arisen. She, however, wants to play the Shamisen, not guard the gates of hell. Oni are everywhere here, and I had fun when I was here before taking pictures showing fierce ones, cute one, hungry ones, cuddly ones, Oni in every imaginable permutation. 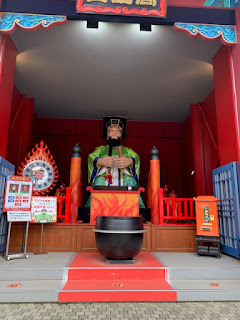 This is Emma, King of the Underworld and judge of the dead. Here, it is sort of an amalgamation between Shinto and some variations of assorted Buddhist afterlives. Emma is more or less Buddhist, but this is a Shinto Shrine. Conveniently, it is coin-operated. You can get fortunes and other things, simply by inserting coins in the machines. He lights up! He looks fierce! He says things! People -- and there were people around, though I saw no foreign tourists  -- seem to enjoy mechanical Shinto. Shinto is both taken seriously as "the way things work" and not-seriously, as indicated by King Emma, above. But, yes, this is a real shrine. You can approach it more conventionally through a path to the side leading to the more usual part in the back. 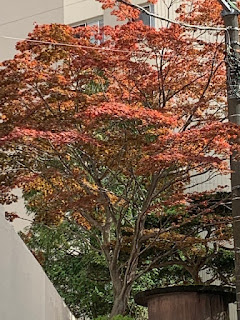 And here we have fall colors. I really came for a taste of autumn, which won't fully manifest in Tokyo until October to November. Here, back home, it's a lovely day (of course) and any typhoon damage in my neighborhood seems to have already been rectified. It's even warm, but low 80s, not 90s, and I plan to enjoy it!
As of October 11, you can, too. The tourist-visa-on-arrival program is reinstated as of that date. Entry caps are lifted. So you can start planning now! Welcome back!

Posted by Claire Youmans Author at 8:01 PM No comments:

A Little Break and Time at Sea

It's been nearly a month since I typed "THE END." After a week of errands and what-nots, I reread, rewrote and sent the manuscript of The Reluctant Dragon off for a first read. I've done a lot of errands and catching up since then. I've had some work done on my apartment. I did some major garden work yesterday, and today I added the latest (and really nice) reviews of The Oni's Shamisen to Amazon and updated the website, adding some new award badges (YES!) and a new picture that isn't too bad.

I'll get this out and then go run a couple of errands connected with something I've wanted and needed for quite a while: I get to take a real break. I'm going on a boat ride.

The longest ferry ride Japan has to offer goes from Nagoya via Sendai to Tomokamai on Hokkaido. It's 40 hours -- an evening and morning, two nights and a full day in between! The boats are different on this run so I reserved not a capsule cabin but a slightly larger version I think I'm going to like. There are Grand Baths (with views!) and I got the meal plan, which should work out well for picky me, since it's all buffet.

I'll spend some time in Hokkaido visiting the new Ainu museum and culture center and at least one Nature Reserve -- this one about migratory birds -- and doing I don't know what all else.

Silver Week is the third week of September, with with 19th and 23rd both holidays. This year, those are a Monday and a Friday, and just like Golden Week in May, people who can do so grab a few vacation days to bootstrap a vacation.

Of course, I didn't think of that when I made my plans or my boat reservations, so the hotel thing was iffy and dubious, and I have to switch once. The main location is near the docks in Tomokamai, and I still haven't had time to really look for everything to see around there.  My interest in the connections between the Ainu culture and the culture of the Alaska and North Coast natives of north America continues, and I know that will be interesting; it's close by, too. I like nature. I like migratory birds and there should be some at the nearby Nature Reserve. What else there might be, I'll have to find out.

Mostly I am looking forward to the boat, which I am taking both ways. I have a couple of actual hard copy books to read as I look forward to the NEXT book, and even the NEXT series, because I am always thinking of what comes next. 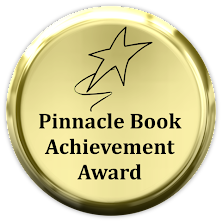 This one is for The Oni's Shamisen. The Shadows of War got one of these, too.

This one is for The Oni's Shamisen. I have several of those -- I think for every book I have submitted to them, but it's nice to show it off. 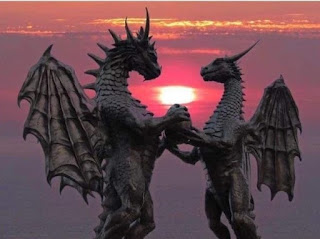 This beautiful statue of dragons in love is located in Bulgaria. They aren't my dragons, though they do look like my Western dragons, more or less, except their wings aren't large enough. But they aren't reluctant, and, like mine, in love, they get a happy ending!

Posted by Claire Youmans Author at 9:15 PM No comments: