The Neighborhood Onsen and My New Toy: A PSA

The neighborhoods where I've lived in Tokyo have been fortunate enough to have actual onsen. Subsidized by public funds, they provide low cost (400 - 500 yen) lovely hot springs experiences, with the water reputedly good for various ailments and sometimes specifically beneficial for skin. 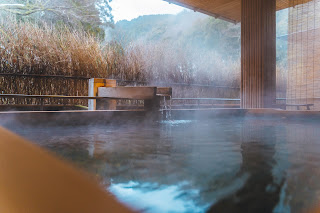 Use authorized by Romeo A, photographer. Not my neighborhood onsen!

Some do have outdoor baths, and some even have views, though not usually ones in the middle of town. They are enjoyable, relaxing, and people frequent them as part of their regular lives, for entertainment and even as family outings.

But in the age of COVID, I haven't been to my neighborhood onsen in a fairly long while, contenting myself with the swimming pool sized "Grand Baths" (with fabulous ocean views) on various ferries, which have been deserted, again due to COVID. I've been missing it.

Furthermore, I've been having dreadful problems with dry skin and falling hair. Apparently, this is not unusual for foreigners in Japan. I've asked about the water from the beginning and been told it's perfectly drinkable and it doesn't taste badly at all. Tokyo Tap is quite palatable.

What it is, though, I've more or less just discovered, is full of chlorine and very hard. I've bought special products, got cream from the doctor, asked the dentist and at just a couple of weeks away from five years here have had no real solution.

Finally, though, I was perusing an expat group that was discussing this very issue and several people said the answer was not a dermatologist or an endocrinologist. It wasn't the presence of some dread disease or the need to order wildly expensive products from afar, but to buy a water filter for your shower! Best 1800 yen I've spent in a long while.

I haven't had my new water filter long enough to gauge its effect on my hair but the effect on my skin was immediate and fabulous. I love it and will never be without one again, and I have high hopes that the fall of hair will diminish, though it will never cease as humans do shed.

The few friends I've told about this have all acted like I must a little slow to not have tumbled to this before, or deduced it from the outset by osmosis or something. I mean, the doctor? The dentist? Who I actually asked? So in that respect this is a PSA. Get a water filter for your home shower! Immediately!

One of the things that is common at an onsen is women washing their usually long hair. Of course, everyone washes their bodies before entering the hot spring bath, but now that I think about it, everyone also washes her hair. Presumably the fellows do it, too, but the bathing parts of onsen are segregated, even if occasionally, in rural areas, the hot spring tubs aren't, so I've never seen boy bathing.

I wonder if many women don't frequent their neighborhood onsen for the specific purpose of washing their hair. Many people are regulars, sometimes with lockers, often with discount ticket books, with their own towels (you can rent them, but that costs) and little baskets or bags of their own toiletries, though shampoo, conditioner and soap are provided.

Since I enjoy the onsen experience, I thought they just liked it! Even though onsen are inexpensive, it's cheaper to wash at home, and just about everybody nowadays has a shower, tub and hot water, though that didn't used to be the case. Now, with my newfound knowledge of the dangers of regular municipal water for skin and hair, my eyes have been opened! It's not just for fun that they come! They also want to use the advantages of the hot spring water to benefit their creamy skin and glorious, flowing, long hair. 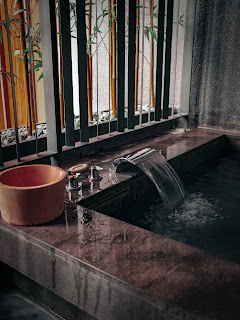 I killed somebody today. In fact, I killed two somebodies, and I think I'll kill a couple more before this book is done.

No, they aren't real people. They're characters. I'm about halfway through this book, and I am about to get massively interrupted for about ten days, which will wreak havoc on my progress as I will have to spend a couple of days reading from the beginning so I remember what's going on. This is a book, remember, not a short story. I hope these interruptions won't lead to more and drag this out over several more months. I would like to get outside.

My planned early August trip is off for now--I can't have another lengthy interruption--and I don't know what will happen to my planned fall trip. I have to get this done. Then I can have a little break, will need a break, before a re-read and rewrite, and more things that will lead to publication.

I thought Steam Bath Summer would be the best time to write, since I don't want to go out any more than I need to, but now....

People really don't understand what writing a book takes. I will spend three to four hours a day trying to figure out what's going on (and can do nothing else but think) and another three to four hours a day writing it. I have no days off. Any interruption means a significant delay and I have to go back and reread. There is a real sense of urgency, of necessity to go forward and fall into the book's world to suss out the story.

And that's where I am at. I have a strong idea of some of the things that need to happen, a vague idea of others, but I don't know it all. The characters will need to tell me, and that means I have to be quiet and listen to them in their time and place.

What has come next in my little garden, though, is the last of the lilies. There are eight blooms on the stems in this post. I hope that what comes next is not a typhoon! 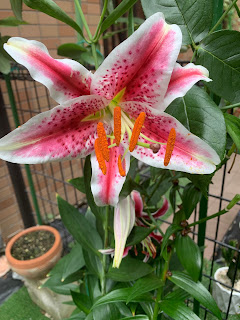 Posted by Claire Youmans Author at 2:32 AM No comments:

Sayaka Murata's Life Ceremony is her new collection of short stories released by Grove in English on July 5, 2022. I asked where and when I could get it and scored an ARC without even asking for it.

When you get an ARC, you don't promise anything. You get a book, and the publisher hope you'll review it, honestly, wherever you can, but you do not commit to it reviewing at all, and your review must be honest. 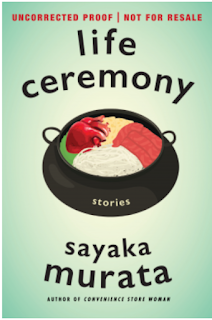 In Life Ceremony, Murata skillfully draws the reader in with a gentle normalcy, a quirky point of view that is very often funny. Then the story skews sideways, and the horror creeps in. This often might be mental illness or might be paranormal, but that is not apparent to the narrator, who always perceives her actions and views as not only normal but superior.

Extending its web through the everyday thoughts of the first-person narrators, the horrific seems normal, even reasonable until it twists away again and you're left to wonder what is real and what is not; what is sane and what is not; and what, even, constitutes evil.

Murata's writing is hard to categorize. Literary? Women's Fiction? Magical Realism? Horror? Does it matter?  Life Ceremony, like all of Murata's work to date, is disturbing, unsettling and wonderful. Highly recommended.

Of note is that this book was translated from the original Japanese by Ginny Tapley Takemori. I read it in English because my Japanese isn't up to literature yet, though I'm working on it. The translation is superb. It keeps the cadence and flow of the Japanese language and the world in which the characters live. This deft and expert touch adds to the quality and value of this edition. Yes, you want to read this book.

Posted by Claire Youmans Author at 6:45 PM No comments: