Jimi Hendrix called his band The Experience because you had to be there. It wasn't something that could be explained. You had to listen.

I was there. I did listen. What Hendrix did for (and to) music is permanent. I could explain the revolutionary nature of his talent and ability for hours but the only way I can truly do so is to call up the recordings and turn up the sound. You have to be there.

Every month, more or less, I go on a pilgrimage to the Head Temple of Nichiren Shoshu, Taisekiji. The pilgrimage is called "Tozan," an actual pun because "tozan" means to climb the mountain -- the mountain we climb is the mountain of enlightenment. This shocked me when I first discovered it because I didn't think Japan and the Japanese were into linguistic jokes and puns. Of course, I was wrong. 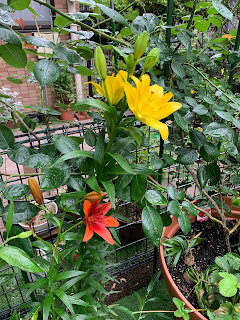 My lilies. We, too, will bloom.
Right now, due to COVID, there are members around the world who long to come and participate in this ceremony, but they can't. I make offering on their behalf because I am conscious of my great privilege to live in Japan and be able to go often. There are the people I know well, the people I know slightly, and the people I don't know at all. I commend them all, in the hope and expectation that they will be able to come on their own, very soon. And I let them know that, in the hope it will touch their souls.

I have even suggested that people could, if they wished, participate "remotely" as it were. That's utterly unofficial and I have no idea if it works, and it really isn't the same, but anything that gets people practicing a little more can't hurt, especially since so many people everywhere, from all faiths and traditions, in all nations, are having difficulties right now.

But I can't explain any of this. Oh, there are words. Go check out www.nst.org for a repository of material that has all the words in several languages. I can't do better except to point out that there are "translations conventions" that really are not accurate at all. We do not "worship." We have no "deity." We do not "pray." We practice a practice that leads to enlightenment. Remember that some words don't mean what you've always thought they meant, and you'll do fine.

I work with words. I've done that all my life. But this is something for which I have no words. This is something that must be experienced. You have to practice, and the practice itself will teach you in ways for which I have never found words. Seek enlightenment, and it will find you. Then you can come to Taisekiji and experience Gokaihi and know you have found what you have always sought. 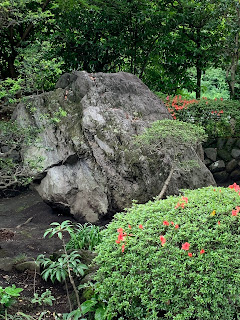 Taisekiji means "Big Rock Temple." Here's the rock, where Nikko Shonin, Nichiren Daishonin's direct successor, appointed by Nichiren Daishonin in authentic writings I have seen, lectured. You can see the path anyone who wanted to get to the top of the rock must take. It's real. It's here.

Posted by Claire Youmans Author at 6:08 PM No comments: