The Fires of Edo

I love reading books about Japan. Especially when they get it right. Susan Spann always gets it right. Her history is accurate. Her culture is on target. Her lore is superb.

She also knows how to write a very tight mystery novel that twists and turns and deftly drifts red herrings across your path. Father Mateo, Iga shinobi Hattori Hiro, Ana-the-housekeeper and Gato-the-cat have come to Oda Nobunaga's Edo on a mission that isn't really theirs and fall into a mystery--their eighth outing--that will keep you up past your bedtime.

If you like mysteries, if you like Japan and enjoy being transported to a different space and time, you'll enjoy this series and this book and look forward, as I do, to these characters' next outing. 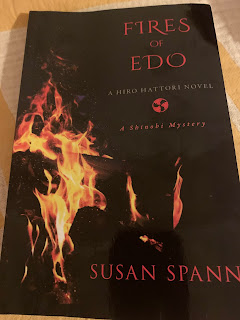 Here's the Amazon link so you can get your own copy:

Posted by Claire Youmans Author at 3:32 AM No comments:

I've been having some problems with my Magic Discount Train Account. It's pointless to examine exactly what or why because it's so strange and bizarre that it's clear it's a combination of demons and Mercury Retrograde.

This has resulted in me standing for hours in train stations and on the phone, in my serviceable but far from fluent Japanese, explaining that, yes, I had done the first three obvious things, I could not do another obvious one from my mobile phone (for reasons unknown) and indeed I had tried several other not-so-obvious things. They managed a workaround, I got there and back and did the things we all agreed should be done to fix the problem. 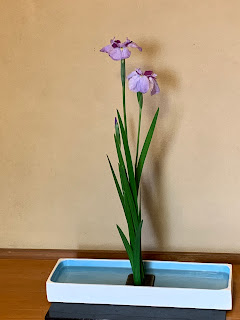 I needed a flower!

I tried again, a week later. First time out, the regular train worked but the Shinkansen didn't. We did a workaround, and decided there was this one thing that was still wrong and I said I would fix that once I got where I was going as I couldn't do it from right there in the station.

It didn't work. After all kinds of nonsense (involving Scheduled Buses Not Appearing, Expensive Taxi Fares, Being Assured that All Was Well and All NOT Being Well) I got a workaround again, and with much sturm und drang, made it home, where I think I have finally resolved the problem by nuking the whole account and starting over from absolute scratch with a new IC card.

I'm out the taxi fare, the unused bus ticket, the amounts loaded into the old IC card (now lost forever, it seems) and the cost of the new IC card. So it goes.

All these conversations were taking place in Japanese, but this weekend, for the first time, the carefully kind and diligent people suddenly started repeating themselves in English and treating me like I might not be too bright and be unsure of what a train actually IS.

Yes, I do Foreign and Stupid rather well, and now I can add Old to the mix, and this often results in my getting plenty of help, kind assistance and generous consideration, but during COVID, there haven't been many foreigners in Japan, except those who live here, because the borders have been closed. The Gaijin Exemption vanished. There has been no slack at all. People have expected me to speak Japanese and know the systems and rules. That's fine with me, because I do live here and I do want to stay, and that means I need to be able to live here like a native, not like a tourist or short-term student or worker. I've been learning. All to the good.

So, what changed? Why was I suddenly being treated like I was just off the plane when that was simply impossible? I was all the way to the last station on my way home last night when I asked the station staffer, after he confirmed that my old IC card was absolutely dead, where I could buy a new IC card. In Japanese, he said, "Go out the door, turn left and head for the Ticket Office, and there will be a machine on your left that sells them." I thanked him and started to leave.

He whipped out a picture of the the machine, so he could show me exactly what it looks like, and said, in English, "If you go out this door and turn left, you will see this black machine on the wall. You can buy a new IC card there. This machine"--pointing--"right here. The black one."  I thanked him, in English this time, went out the door and bought a new IC card, wondering what the heck.

Then I realized what was going on. Just this past week, it's been announced that tourists will most likely be allowed back into Japan in June. The numbers will be small at first, and initially probably restricted to approved groups, but tourists are coming back.

So rest assured. It looks like you'll be able to come back soon enough, and Japan hopes you will. All the kind and diligent Japanese workers in hotels, taxis and train stations, as well as on trains, will be ready and willing to happily welcome you. 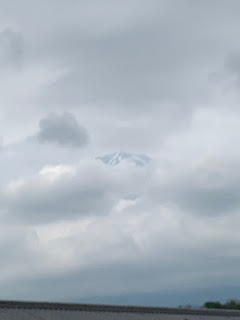 Just a peek -- but Japan will open, and you will be able to come. Soon!

The Music of Flowing Water

Taiseki-ji, the Head Temple of Nichiren Shoshu Buddhism, is located in the foothills of Mt. Fuji. The original land grant is huge; the grounds are enormous. Now, Taiseki-ji sits in the apex of a triangle formed by a National Park and a Provincial Park. Highways provide convenient, though often crowded, access.
The location is remote so the Temple grounds remain intact except for the occasional road. This walkway was first constructed in the late 1200s and has since been expanded. The original stones remain in the center. Subsidiary Temples, called "bo," housing some of the priests who work in the various offices and departments necessary for running a major world religion, and also dating back to Taiseki-ji's founding in, officially, 1290, line this path. 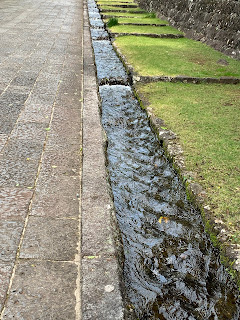 Since it's in the foothills, Taiseki-ji is naturally built on a slope. Since it's in Japan, there's a lot of runoff from snow and rain, draining eventually into a river that bisects the Temple grounds and ultimately empties into the sea. Since this is Japan, the runoff is neatly and expertly contained and controlled. Charmingly, the occasional plant that might line a natural stream will be carefully maintained so it can flourish. 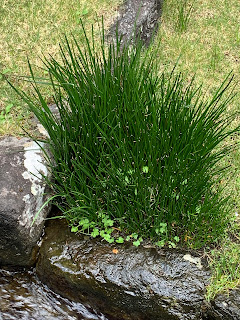 These stone bridges mark the entrances to the various "bo," and the lanterns, lit for festivals, illuminate the gates. 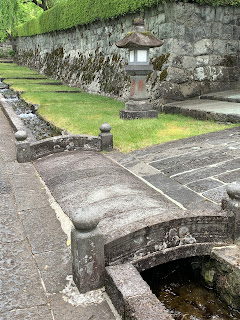 This fountain seems to contain a spring that rises from the front of the Mieido, a seriously gorgeous, highly historic and nationally Listed building, spilling over the edges to be contained, running underground to join a stream cascading through the grounds. It has a twin on the other side of the entry, beyond which the stream itself tumbles over an artistic jumble of rocks. 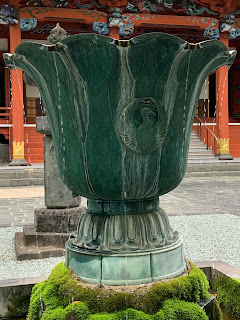 That stream, as far as I can determine, will eventually, via waterfalls, fill the pond in this fabulous garden.

This pond, and the streams lining the stone path, are periodically drained for maintenance and repair. Of course. This is Japan, and this is Taiseki-ji. The care is meticulous, just as is the care the army of landscapers and gardeners pay to every single plant.

I have seen this pond drained before, at the height of summer, for a few days at time, with the stream feeding it somehow diverted. This winter, however, it was drained for a couple of months, during the driest of seasons, as what looked like major maintenance took place. Moreover, the streams lining the stone path were drained, too. While there was never anybody around to ask exactly what was being done (due to COVID, not many people are allowed to visit at any given time, no visitors can stay on Temple grounds, and residents keep their careful distance amid every possible and sensible precaution) it was obvious that what was happening was major. I saw the occasional large machine in the pond, I think set up to clear the channels. I saw fresh cement repair cracks, sometimes around the rocks in bottom of streams.

And then, just recently, I saw that the repairs were complete! The pond was full. The falls cascaded. The streams gurgled. I was delighted.

It could be said that I'm a little slow sometimes. I've been coming to Taiseki-ji for thirty years come August. I always thought those rocks were visually decorative, placed to fool the eye with the appearance of natural streams.

This time I realized something different. The water didn't just create music with its flow, the music was a carefully planned part of the art that goes into these wonderful grounds. It changed and harmonized as I passed on the long walk up the hill. 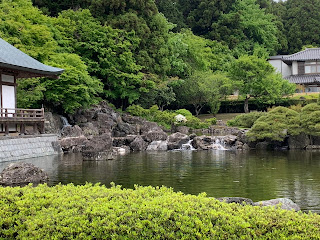 This time, I listened as much as I looked. Buddhist practice is a continuing thing. It's not a one-and-done. It's a practice that we undertake every single day to manifest our innate enlightenment. It's not always easy to do that, but we are advised to keep it up, that Buddhahood lies in the continuation, in having faith like flowing water, in never giving up. Here, the masterfully designed music of the waters conspires to continually remind us of that. 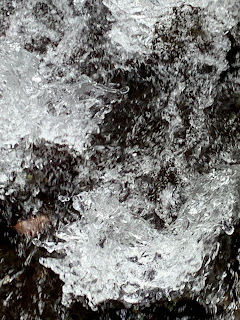 It looks like Japan will shortly ease restrictions on "tourist" visas, and that means these grounds can once again explode with the laughter and conversation of all the people who have wanted to come here on pilgrimage trips from overseas and have not been able to do so, adding to Taiseki-ji's music. I will rejoice to hear it. I hope you can come soon!
Posted by Claire Youmans Author at 9:00 PM No comments: