Kekko ja nai desu -- It was not enough!

"Kekko" means "enough," so if you don't want more of something, you say, "Kekko desu, arigato," which basically means, "No, thank you; I've had enough."

It's a huge tourist destination, home of several World Heritage sites and National Treasures and a huge National Park. The big deal you'll see everywhere is Toshogu Shrine where Tokugawa Ieyasu's spirit was ultimately elevated to kami and where his remains are interred. Huge quantities of history! Famous sculptures (those three moneys and the sleeping kitty, among others!)  Fabulous architecture, paintings, and so much more. Other members of Ieyasu's clan are mostly in Tokyo at the very venerable Zozo-ji, a worthwhile visit on its own. It has an excellent museum. I like museums.

I just returned from my third trip to Nikko, and my first in the spring. I had hoped to be celebrating the soft release of The Oni's Shamisen, but Things Happened, so that be within the next couple of weeks. If you are awaiting an ARC, you will get it soon (and if you want one, let me know.) But there was a pause, and I enjoyed every second of it. 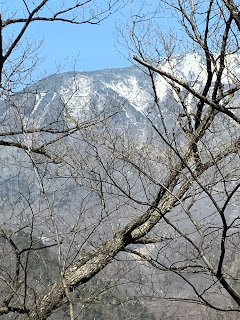 I had thought that the sakura would just about be out in Nikko, but the elevation ranges from about 600 feet to about 5000 as you go from the train station to the top at Yunoko, which was as far as I could get by bus. There was snow on the ground. The source of the famous local hot springs is at a temple called Onsen-ji. Yes, that does mean Hot Spring Temple. Water is piped from there to the onsen hotels in this tiny town.
Lower down, at Chuzenjiko, a much larger and lovely lake boasts another interesting ancient temple, a science museum, boat tours, rentals and fishing (not running yet), hiking (some trails open, some not open yet) and more hot springs!

In Nikko proper, the sakura were just about to pop and many did while I was there. Pretty, huh? Gloriously gorgeous, in fact. And it just got better. I stayed at Gableview Forest Inn, a charming place owned by delightful people, and where I will return. I enjoyed it so much, I almost hesitate to tell you that you can reserve on Booking.com and many other hotel sites, but I will, so you can go there, too.

Comfortable! There's a onsen! Excellent cuisine! Oh, yeah. This is where you want to stay!

Though I only selected ONE photo to upload, they all came at once. So you're just going to have to read the captions to see where these are. It's worth it.

These are wild rhododendrons that look to me the same as Korean rhododendrons as they are deciduous, bloom on bare wood and then leaf out. Here, of course, they are JAPANESE rhododendrons, and since they are wild, they certainly are. This is on the way to Kirifuri Falls, one of the three Big Falls here. 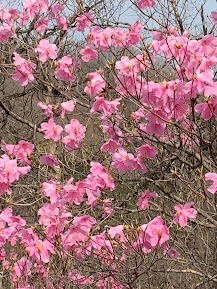 And here are the falls. The top part, anyway, with more flowers. Truly spectacular. 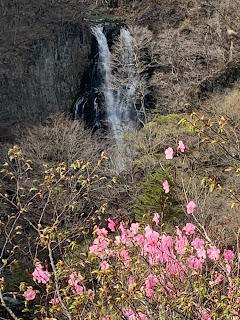 This is Lake Yuno (Yunoko: "ko" is lake). The ice was gone, but there was snow on the ground. People will fish, boat and hike here soon. I came to walk around this small lake, but the trail is still closed by snow. Instead, I walked to a very small little ski area, but there was nothing interessting to see there. 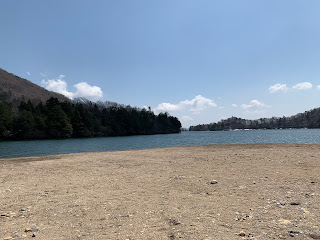 More Kirifuri Falls. See the pink starting up on the hills by the falls? This is most of it. It goes down a little farther. 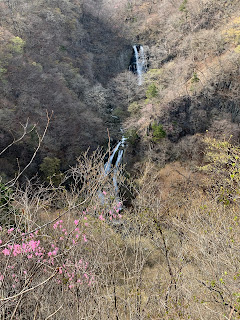 Thursday, it was supposed to rain (and it did) so I planned to go see Edomura, an Edo period theme park I'd really had no interest in before, but I wanted to research street entertainers and they're supposed to have them, and do, when it's not pouring. Again, the season doesn't really open until next week, but the park was open. It was much better than I thought it would be, and I want to go again! It's worth your time and simply fabulously beautiful.

There are a number of Jizo statues along this path and a few real, serious, working shrines. This one is small, tenderly cared for, and, as you can see, beautiful. 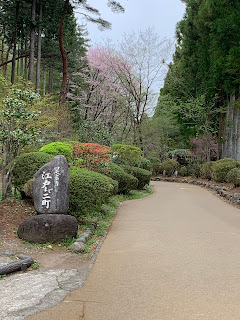 This is the entry, the "Post Road" area, setting the stage for your entry into the period town that comprises the park. There is an actual movie set connected to the park and I expect a lot of filming reaches into the park during its off-hours. It is closed Wednesdays. 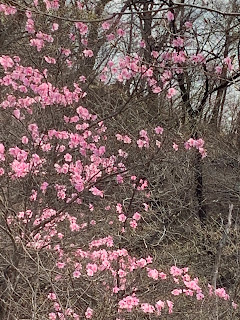 Kirifuri Falls again. Those flowers...breathtaking. Pink blossoms scattered all over the hills. 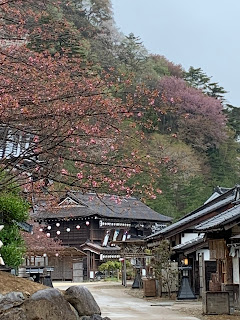 Edomura is beautifully landscaped, of course, and there are many varieties of blooming trees everywhere. Here's a cherry just starting, with more backing it up the hill. Look at how impressive this is: yes, it's a theme park. Yes, it is authentic, with plenty of history, culture and so much of the beauty and attention to detail that Japan prizes. 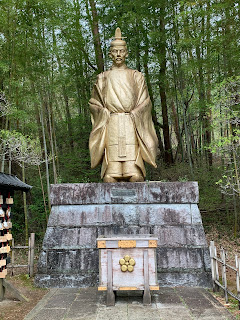 Sugawara Michizane is a collateral ancestor of my painstakingly researched but still fictional Maeda family. Statesman, scholar, and poet, he ran afoul of the powers that were, and ended up exiled in Kyushu (see: The Shadows of War). After his death, many Bad Things happened that were attributed to his angry spirit. In reparation, his lifetime titles and honors were restored and he was, of course, elevated to kami as Tenman or Tenjin. The Bad Things did stop, so one may assume he liked that.

He is the patron of scholars, particularly, and is often petitioned by students. Many shrines honor him including one shrine in Edomura. This statue, above, depicts Michizane, with his plum blossom crest on the offering box. It's a working shrine. I saw people perform the traditional rituals. Off to the left you can see racks of plaques of written petitions left in the hopes that Michizane will read them and give them a boost. 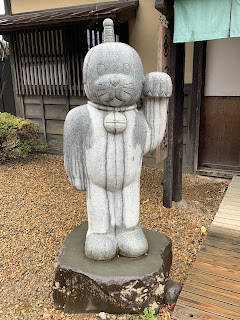 This is Nyanmage, the mascot of Edomura. Hello Kitty's brother, or maybe cousin, his superpower (there's a hilarious film along with many others depicting performances that were not live that day) is raising his left paw and saying "Nyan", which is "Mew" in Japanese. His hair in in the traditional style of a samurai man. He has a princess for a human companion, and is accompanied by a puppy, a panda and a monkey, all of whom likewise have human women as companions, though I am not sure if they are princesses. They defeat all manner of bad guys, including (naturally) evil ninja and (of course) tengu.

Before I left Friday, I went to the Toshogu Shrine museum. I've been to the shine before. That will take you all day and worth it. Friday, I had just a few hours, so the museum seemed like a good bet. It was raining and foggy but see the fabulous pink of the sakura behind these bare trees. No pictures inside, though. Too bad: there're some interesting items on exhibit. 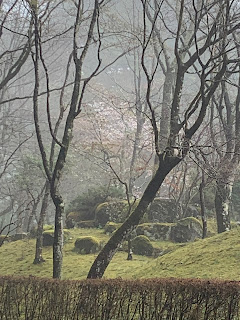 Japan recognizes and celebrates skill. This statue is of the architect of Toshogu Shrine and a number of other famous monuments built in the early to mid 1600s. I got the sign in the hopes of preserving his name, since it was raining rather hard, but now I can't make it out. I'm glad he is remembered and honored, though! His work is wonderful.

And one last photo, where I tried to capture, through the rain and fog, the subtle magnificence of the wild sakura and other flowers starting their season of bloom in the hills.
For me, it's "kekko ja nai desu." No, I haven't had enough of Nikko. I'll be back.