Last night, reportedly at 11:39 pm, we had an earthquake. It was a big one, centered off Fukushima, and the world shook. Here, in Tokyo, it wasn't that big -- registered at a 5 or so -- and didn't last that long. Here.

The last big one I felt was while I was on a boat coming back from Okinawa at the end of January, and it was fascinating. I've been on a boat in an earthquake before but not one that was traveling off shore at speed. I woke up. Then, there was a big, sharp noise. A couple of giant jerks. Shaking. I heard no alarms and the actual sounds of the ship under the weird noises were...the same. The motion of the ship was...the same. So whatever we hit, if we hit something (and I couldn't figure out what it might be, with the weird noises and jerks coming from where they did) we didn't seem to have a hull breach of any size, though we might have leaks. I got up, grabbed my purse, went to the head, both just in case, and started exploring. 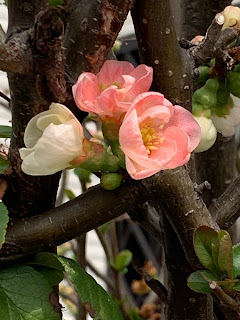 From a walk; flowering quince

The ship was nearly empty and the crew, except those out of sight running things, were also tucked into their little berths. I looked out. The wake was normal, we were not wallowing or listing, and again, all the noises of the ship's systems sounded as they should. Finally my brain woke up and I thought "perhaps this was an earthquake!" I checked, and indeed it was. A big one, too, and we had been floating right over the epicenter.

To be fair to my sleeping brain, this whole process took less than ten minutes. The next day, or the rest of the day, whatever, felt a little unsettled, but of course we were moving and traveling and -- hey! Whales!

Yesterday, I was thinking about earthquakes and how we seem to get one about every three months. I thought we were just about due. I didn't look to see exactly when the last one here was, but I did remember the quake on the boat. No, that wasn't here, or even close, and it was less than two months ago, so why was I thinking we were due? I know the enormous 3/11 quake and tsunami anniversary just passed and so it was on the news and in the papers and all, but still. Were we due? Nah.

Last night, I was in bed, where I'd been reading before falling asleep, when I woke up. It was still and quiet, nothing going on. And then..."here it is," I thought. A few seconds later, the shaking started, slowly at first and then harder and harder. I wondered what might fall over and need cleaning up later, but heard nothing. The little lights that show the HVAC and all the chargers are on went out, and the bits of light that come around the blackout curtains from the garden lights vanished, too. The shaking evened out, persisted, then subsided and finally stopped. It didn't last long. A few minutes, maybe. I thought about going back to sleep, since I was nice and warm where I was and the power was out, but then I decided I better get up and check the time and see how bad it was.

No power, so no Internet, except on my phone, which was way over there. No shrieking earthquake alarms (just in case we missed it, I guess) from my phone or the community loud speakers, which are a little too close sometimes. And...no cell phone service, but it was 11:45 pm. So...no power and no cell phones. That meant it was bad somewhere. 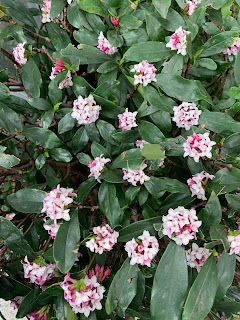 Scented daphne, while walking to the Oko and Myokoji.

It was also cold, though not freezing, so I took my phone and went back to bed, where it was warm.  In about 15 minutes, phone service came back and I was able to get the information on the quake, the size, the location, the tsunami warnings, and plenty of updates from people on Facebook reporting that they were fine, though things had tumbled from various people's shelves or even, in one case, that shelves themselves had fallen. Power was out from far north in Fukushima and Miyagi all the way into Yokohama, so it wasn't just me. That bode ill for getting it restored quickly. Watch for aftershocks, they said and keep saying. So, yes, I went back to sleep. I woke up much later to false dawn, nautical twilight, so I could see enough to determine nothing I hadn't heard fall had fallen, get the heat turned on since there was power again and go back to sleep.

I didn't take the phone away to plug it it, so it was right beside me when its wake-up music started and I remembered why I keep it all the way over there: it was so easy to turn it off and stay warmly tucked in while I welcomed the morning (hello, St. Patrick) through the restored Internet, which remains wonky. I have been behind and out of synch all day.

Dogs, cats and other animals are reported to sense earthquakes in advance. My Facebook feed has stories of how people's pets gave warnings this time or had in the past, in Japan and elsewhere, generally followed by how the humans were just too stupid to notice or properly interpret what was going on. Maybe I'm like a cat or dog and just need to pay better attention. At least when I wake up at night without rhyme or reason, or get earthquakes on my mind. Maybe we all need to do that. We might be more like our pets than we think!

It's been an oddly unsettled sort of day. There's no real reason for it, but the days after earthquakes or floods or typhoons always seem to be that way. I've done off-all besides this. But there are bits of news.

I'd love to give you a book. I'd love to give you a few!  If you go to Booksprout.co, and look for either Claire Youmans or The Toki-girl and the Sparrow-boy, you can get review copies of ALL THE BOOKS for absolutely free, starting March 18. You will have to sign in as this is a review site. I suggest you take them one at a time, starting with, yep, Book 1, Coming Home.

I can't making giving reviews a condition of giving one or more to you, but I for certain sure hope you will love them and review them and read every single one of them AND want The Oni's Shamisen when it appears, which will be soon. I should have the cover any day now! If you have all the others and just want to get a copy of The Oni's Shamisen, just let me know by email, on FB, or at www.tokigirlandsparrowboy.com with your email address and preferred format. You can also get The Sparrows of Pusan, a sideways story, for free, there, too. 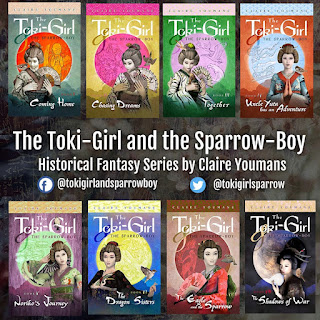 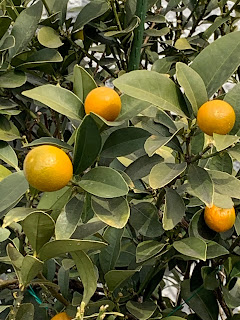 From a walk: a Calamondin Orange tree, with its tiny, and edible, oranges!

Posted by Claire Youmans Author at 11:27 PM No comments:

The Oni's Shamisen is done.

It's waiting for things like cover design, formatting, and final proofreading before we can go into the actual process of publishing it to the market.

We need Advance Review Readers. You can do this!  Let me know if you want to join in. We can only ask nicely if you would kindly leave an honest review, so we do, and you get a free book! It's a good one, too. Some publicity efforts are contingent on having a minimum number of reviews posted in certain places, so this would be very much appreciated. Since book prices are going up and up and up -- they say due to production costs, though how that affects e-formats, I don't know -- free books are a good deal.  They'll be available in Kindle, E-Pub and PDF very, very soon. 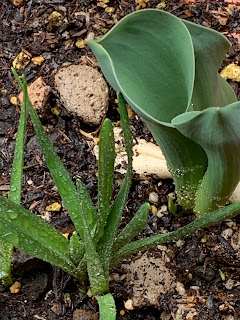 Narcissus and tulips are coming right along.
I've been frantically busy with many "business" kinds of things since I got back at the end of January, like immigration. (I got another year. I have to go back to the immigration lawyer. This year-at-a-time stuff and living out of a suitcase is getting very old. Maybe he can fix that.) And taxes. (Yep, they're done in two countries, and I now have an official Japanese tax account that I managed to set up and do, in Japanese, at the local tax office. Yet another thing they don't teach at University.) People are coming out of the their quarantine hidey-holes and catching up on things they've been putting off, now that Japan is opening internally, so my regular dentist appointment (something I never put off) is still in the future, but it's set. I got the booster, setting up that appointment on the phone, in Japanese, which I am very chuffed about. The telephone and formal language are still terrifying after all this time. More things they don't teach at University. 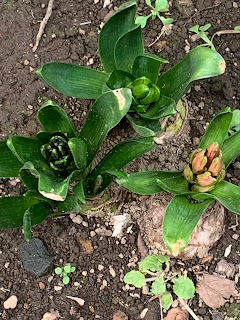 Last year's hyacinths that I put in the ground are coming back! I have new ones in a pot, too.

I've been to Okinawa and I'm set to go to Nikko in April. I've been there a couple of times for day trips, but I've always wanted to go back and stay a few days so I am going to. It's going to fit right in with what I need to do next.

There's another book on the way. That's why I went to Okinawa, as the incorporation of the Ryukyu Kingdom into Japan proper as Okinawa prefecture is part of the next book. It's a fascinating story.

Not only is my visa contingent on pursuing my "cultural activities", but it's something I enjoy. They're as much a surprise to me as anybody else. I have a couple of thick books to read, and I'll enjoy doing some of that in Nikko. I hope the final finishing touches on The Oni's Shamisen will be done by then, but one never knows. 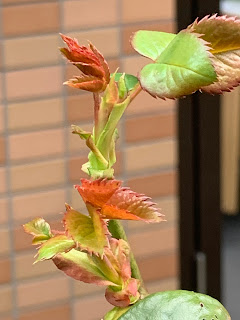 My wonderful climbing rose is starting to come back.

Now it's thinking time, as I spend all my days and nights, or as much as I can manage, thinking about what the story of Book 10 will be, what happens to the characters and what they're going to do about it. Like I planted my bulbs, I planted ideas in prior books. Now it's time to see what might come up. This takes time, inside and outside. I read research books or lighthearted mysteries I've read before to leave my brain free to percolate. I get into the heads of my characters, and they do in fact speak to me. This is why I don't rely on an intensive outline method much, though, in a couple of months, when I settle down to write the first draft, I'll have a pretty good idea of what's going on. This, even more than first draft, is a grouchy, unsettled, cranky time, as my brain tries to pull the threads of stories out of history's whole cloth and weave them all together into a coherent potential that, in time, becomes a book. 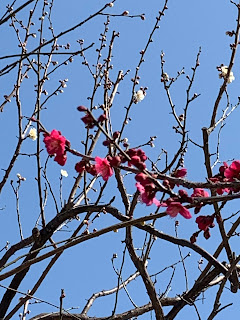 Or blooms, rather like these plum blossoms, two trees, two colors, from the park across the street.
Please do sign up to be an Advance Review Reader. Comment or email or DM on Messenger (FB) or Messages (Apple) or at the Toki-Girl and Sparrow-Boy website. I write good books. You'll like them.
Posted by Claire Youmans Author at 8:08 PM No comments: