The Oni's Shamisen, book 9 in the Toki-Girl and the Sparrow-Boy series is coming SOON.
THIS is why you won't be able to resist it.
Have fun!
Posted by Claire Youmans Author at 3:38 AM No comments:

Posted by Claire Youmans Author at 12:07 AM No comments:

People in the major cities of Japan, like Tokyo, where I live, often come from somewhere else. Many people have family properties that have been passed down through generations. People frequently go "home" to celebrate the O-Bon and New Years holidays with their families and take long weekends to work the family fields, orchards or gardens and then bring a share of the fruits of their labors back to the cities. The houses are sometimes huge, capable of entertaining many guests or even housing several families.

It's fairly common that when the older generation starts needing more help, a child will move "back home," and may take over a family business or start a new one.  People plan to retire there. Now people who are able to work remotely are moving "back home," too. But the fact is that most of the jobs are in the cities, and young people go away for tertiary education, not returning until much later in life, if at all. This means that the smaller cities, country towns and rural areas don't have much of a tax base. In short, they're poor.

This is where Furusato Nozei comes in, and it's a charming idea that could only be realized in Japan.

In additional to National Income Tax, which generally runs about 10% overall, everybody pays Residence Tax to their local authority.

If you want to -- any why not? -- you can pay a portion of your Residence Tax to an area that could use the revenue. That area will send you a "Thank You Gift." You get to deduct what you send them from your local Residence tax bill, and your real or adopted "home town" will send you a present! You can even adopt several towns, and you can send more than you are allowed to deduct, if you really want that present.

The presents range from asparagus to uni, and are usually local products. They're not always food items. They're generally what the area is known for, be that sake or pottery, fish, eggs, tofu, a case of facial tissue or other truly useful everyday items, or whatever.

Craft items made by people in sheltered workshops are also available, so you can double the benefit you get (in terms of beneficence, not tax credits) by selecting hand-woven place mats, or hand carved toys. Sometimes there are experiences among the choices, like onsen weekends. Just about anything you could imagine is there. You don't have to pick the same area or the same present every year. There's some competition among the various participating localities to make their gifts generous and attractive. Yes, small town Japan wants YOU.

There's an online catalog that helps you calculate your maximum deduction. It's in Japanese, but it's fun to look at the pictures. They won't bite. Furusato Nozei Catalog

If you have Chrome, it'll even translate the page for you.

Clever, inventive, charming, adaptive -- this is an "only in Japan" system that makes me reflect again on why I love this country. 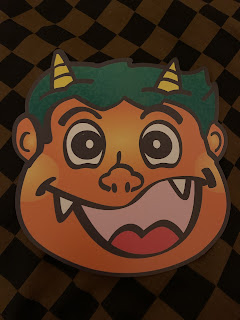 And an oni mask, free from the grocery store for setsubon. How could I resist? Japan can even make demons fun!

Posted by Claire Youmans Author at 7:51 PM No comments: 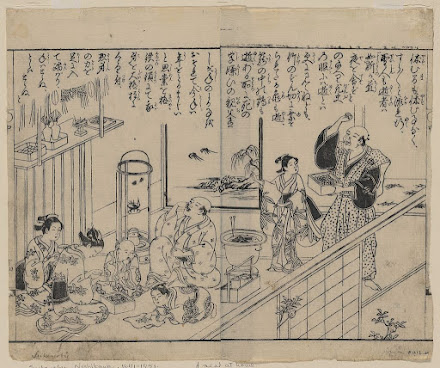 On February 3, right around the day known in some places as Candlemas and other places as Groundhog's day, exactly halfway between the Solstice and the Equinox, the Namahage, also called Oni, who may or may not be demons, come down from the mountains in the north of Japan and some other places to terrify and terrorize the villages, stomping around and shouting, exhorting adults, but mostly children, to behave themselves and do what they're supposed to: their jobs, their chores, their homework. Otherwise the Oni might take them up into the mountains and do goodness knows what with them!

Everybody says they've behaved properly, of course, and parents extoll the virtues of their terrified wide-eyed children, who promise they will be very good indeed in the coming year! Celebratory food and drink are served, toasts are drunk, gifts are given, and with a bit more stomping and shouting, the Namahage retreat back up the mountain for another year. Local groups of Namahage visit shrines and Temples, and also make tours of entire neighborhoods or villages, repeating the ritual at each house. The festive meal will likely be eaten by the family after they've gone. It's usually served, but untouched. The Namahage do collect gifts and goodies and are known to quaff a cup or two at every stop.

At the Namahage museum in Oga, you can see all the local costumes used in recreating this ritual by stand-in Namahage, and even join in a Setsubun visit at any time of year. Yes, they are scary, when they come up and stomp and bend over you and shout, but soon enough they'll accept your assurances, and your gifts, and all will be well for the next year, as everyone breathes a huge sigh of relief and starts laughing.

Other places aren't quite so invested in the entire performance, though the ritual and the celebrations take place all over the county. The Oni's Shamisen will talk about this in much more detail, since there's an actual Oni, from that part of the country, involved.

In most places, including my little corner of Tokyo, people purchase their roasted soybeans, though some people probably roast their own, and scatter them, crying "Demons out, Fortune In!" The family in this woodblock is engaging in various aspects of this national ritual.

The beans are swept out, to be collected and consumed.  Neatly, nowadays, they are packaged for easy pickup by spectators at temples and shrines, offices and businesses. People consume the same number of beans as their ages, plus one, for luck.

Animals and birds will take care of any that are missed outside.

What occurred to me as I got my beans and my oni masks ready at the same time as I looked for news of the Groundhog (it saw its shadow in Tokyo) that as an expat I am happily adopting the customs of my country of residence while still looking to with pleasure to the customs of my country of origin. Later in the month, I'm going to want a cherry pie and English curry (family customs for specifically Washington's Birthday and Susan B. Anthony day.) Sunday was my grandson Vaughn's birthday; today is my grandson Miles' and tomorrow is my daughter, Tracie's, and if I were there I'd be baking cakes and lighting candles, wrapping presents and planning dinners. I have sent things, of course, and hope I'll be hearing from them.

We don't have to lose anything when we move to different places. We don't have to change one thing for another or avoid enjoying what's new. Demons out! Fortune in! Have a great year, everyone. 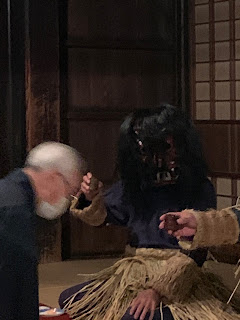 When the Namahage visit... 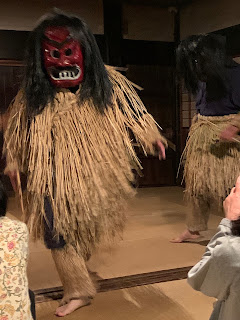 Oh, no! Here they come!
Have you been good?
Posted by Claire Youmans Author at 1:24 AM No comments: