I was looking forward to Shuri Castle, had been for years. The whole idea of the Ryukyu Kingdom, playing Japan and China off each other, sitting spider-like in the middle of a trading network that spanned southeast Asia, intrigued me. The art, craft, culture and the architecture borrowed from China and Korea and points south as well as from Japan and yet stayed uniquely the Ryukyu's own.

The opium wars broke out in China (see The Lotus-Foot Assassin Meets the Dragon King), and then Perry arrived in the Ryukyus on his way to Japan and there was a "friendship treaty" (I think they called it) that I have no further information on yet, but knowing what Perry did elsewhere, I doubt if there was much amity included.

Japan, bent on securing as much of the archipelago (and more) as possible to present a strong united front to the West and avoid being conquered or colonized, pushed its semi-tenuous relationship with the Ryukyu Kingdom forward starting shortly after Perry's arrival, and after preliminary rounds including jockeying with China, formally annexed the Ryukyu Kingdom, deposed its monarchy and established Okinawa Prefecture in 1879.

That's where my characters come in, in 1878, in Book Ten of the The Toki-Girl and the Sparrow-Boy Series. This is a research trip, to learn what I can't learn anywhere but here, and you'll find out much, much more when it all comes together in a published book. The book about the Ryukyu Kingdom was supposed to be Book 9, but thanks to COVID what has become Book 9, The Oni's Shamisen, is shaping up to be a very good book and will be published this year.

But in 2019, pre-COVID, even as I was starting to plan for this trip, beautiful, elaborate, detailed, delicate Shuri Castle with all its history was destroyed by fire.

That's not the first time, either. It's the seventh, they think. As soon as the ashes cooled, crews moved in to salvage what they could (almost nothing) and started clearing the site to rebuild. They've done it before; they're going to do it again. 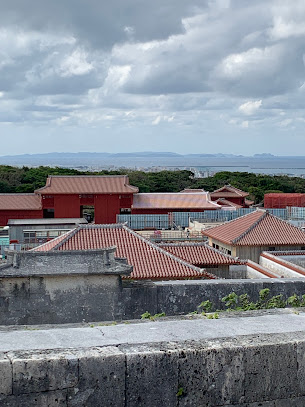 This is taken from the far back of the compound. Forward you can see a big bare space. That's where the central buildings of the castle were. Now, it's being excavated and what remains of historical foundations cataloged carefully preparatory to reconstruction. 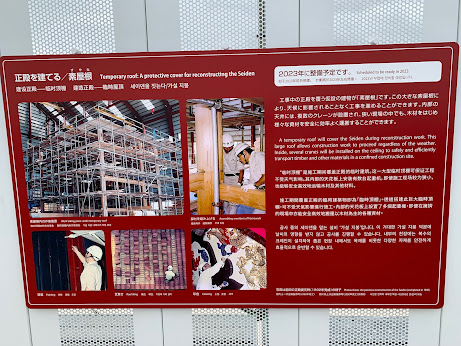 One of the many signs on the fence surrounding the construction site explaining what they're doing and what they will be doing. Once the outer building's up, people will actually be able to watch the workers work, as was done with Taisekiji's Mieido.
Those familiar with the renovation and reconstruction projects that have taken place at Taisekiji with respect to historic and important buildings, will recognize some of the process. They're collecting and storing all the right kinds of lumber so it can age and dry. They're somehow carefully making templates and drawing plans. They will cut pieces to ensure perfect fits. They'll build a huge building and then construct the new Shuri Castle buildings inside it, so that nothing can be damaged by wind or weather during the process. Fortunately, we now have films and photographs and records so that much of what was done for the last reconstruction (much of Shuri Castle, like most of Okinawa, was leveled during World War II) doesn't have to be done all over again.

They plan to have it done and ready to reopen by 2026. I'm sure they'll do just that. Count on it.

It's impressive as hell. Not just the scale of the work or the expertise and detail involved; I've seen that before, and that is of itself impressive.

What's incredibly impressive and clearly visible here is the tough resilience of the people. Knock them down, and they'll get up fighting. They do not give up. Surrender is not part of their vocabulary. Strategic retreat is as far as they'll ever go, backing up to figure out how to come back perhaps not exactly the same, but better and stronger.

We can learn from them. 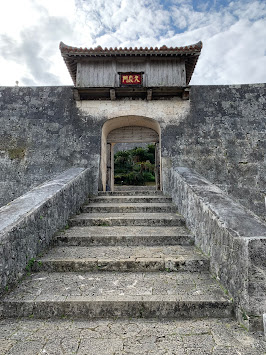 This ancient gate is still standing. The ramparts, so carefully built with stacked cut stone, the fine detail and craft that went into the paving of the walks, the construction of the stairs -- those are still standing, too. Shuri Castle will rise again. It and the people who cherish it aren't going anywhere, either.

Posted by Claire Youmans Author at 4:31 AM