Happy new year to all!

It's always cause for gratitude, if only because we are here to see it.

And because it affords us more chances to repay our debts to the universe around us for all that we have received. 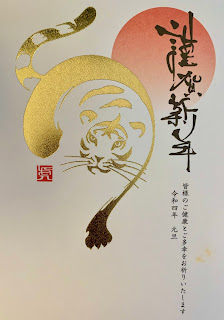 May the succeeding years only get better as we grow in wisdom and grace.

Happy new year to all!

Posted by Claire Youmans Author at 10:35 PM No comments:

Posted by Claire Youmans Author at 7:34 PM No comments:

A number of people of my acquaintance, Gaijins all, have been waxing lyrical about how much the Japanese absolutely love Christmas (even though only about 1% of them are Christians), and adore celebrating it as a secular holiday with presents and stockings and Rudolph and Santa and trees, singing about Baby Jesus and Angels--without having the vaguest idea who or what those might be. Doing just what Americans and Europeans do on TV commercials, except it's not a holiday in Japan.

Didn't those Wise Men bring Kentucky Fried Chicken and a Victoria Sponge cake filled and topped with strawberries? No?

I wonder what Japan they live in.

I was out today, running various errands in a commercial district near my apartment. I visited a shotengai (covered shopping arcade, plus department stores, plus mall, plus shopping streets) where everything is on sale all the time because it's SOMETHING! There's a tiny indication, on the SALE posters, that an itty-bitty rather odd looking peeking Santa (like you sometimes see on toilet seat covers) wants you to buy things for...New Years! Accompanied by an endless loop of "I Saw Mommy Kissing Santa Claus," by twenty different artists. I am not kidding. I wish I were.

What I saw everywhere was New Year's! I saw decorations, expensive and cheap; fake and natural; tiny to enormous. There are tigers of any and every shape and size, dozens of racks of cards and reminders to be sure to send those New Year's cards while the postal rates are at the special New Year's low. I saw mochi for your Buddhist altar and twisted ropes and paper braids for your Shinto shrine, of any and every shape and size.

There was a lot of Solstice, too, with red, white, silver and green garlands and some wreaths, but the Solstice is based on an annual astronomical occurrence that has nothing to do with Christmas. All those decorations pre-date Christmas by thousands of years and, while Japan normally follows and celebrates the lunar new year, the solar new year was also traditionally honored in its passing, though not with the same fervor. Illuminations are very popular, with lighted outdoor trees and gardens and plenty of winter fest sorts of things. These usually run from November through January, and ice skating rinks might be involved. 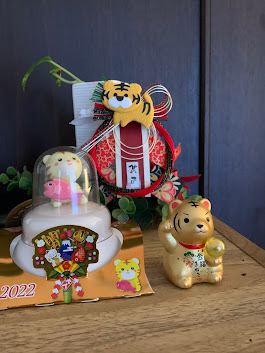 My little New Year's decorations: for the door, the altar, and just because Lucky Tiger is cute.

What I think that people who are Religiously or Culturally Christian are seeing is the Christmas that's in their memories and their favorite movies, the one they want to re-create, the one they can't see doing without, in a country that does without it just fine.

The family reunions, the holiday visits, the cards, the religious services, the special dinners, the midnight bells, and even a tiny bit of gift-giving to children (always money) are all part of New Year's here. "Christmas" is kind of a prequel with hot spiced wine and Alpine-Bavarian Generic Winter With Reindeer and Sleighs.

Maybe I don't see "Christmas" the way other Gaijin do because I'm a Buddhist and while I am happy to celebrate Solstice and New Year's (twice), Christmas is very much somebody else's religious holiday to me. You just can't make Baby Jesus's Birthday and Saint Nicholas secular to me. Maybe that's why I don't see it on the streets and in the shops.

What survives, what always survives, I think, no matter where people go and no matter what else changes in their lives are edible traditions. Even if the Three Kings don't bring candy canes and hams and turkeys, I am seeing much Internet action on how to buy all of those in and around Tokyo as hotels go hog-wild trying to grab foreign customers with Japanese takes on a medley of supposed western winter customs.

The edible traditions I like start with dressing. I'm a real sucker for dressing. I have something like six different recipes, including chestnut. Chestnuts are plentiful here, but are almost non-existent in the US. I make a great gravy. Sweet potatoes, roasted, and winter squash (pumpkin) are available all year. So are Idaho potatoes, carrots, little onions, green beans, and so many other wonderful things I remember. I can make all of these any time. Further, I can make them all vegan, so it's boringly healthy but still tastes fabulously traditional to me.

I can't make the traditional sweets, though. I don't have an oven. I don't have much of a kitchen. I have zero counter space. I can't get the ingredients. But this year, I got lucky. VERY lucky.

One of my family traditions in fruitcake. The real deal, from a recipe so old it's almost ancient. Like nothing you have ever seen for sale, except maybe by the Trappist Monks, and I'm skeptical  about theirs. To get the good stuff, you have to make it yourself. And you have to start last summer.

Another, though not so ingrained, is mince. I'm not talking about mince-meat, which actually does contain meat and is a way of preserving meat through the winter with sweetener and spices, rather like pemmican. No, this is mince, which contains everything but the meat, usually substituting apples. Made into a pie or tart, it is so good!

Both of these classic dishes come out around the Solstice to start using the preserved and dried fruits when the fresh or stored fruit is close to gone. You can eat these until spring comes and fresh fruit becomes available again. Raisins, currants, figs, apples, pears, plums, berries -- any summer fruit preserved with sugar and brandy or sometimes dried, these fruits lend themselves to concoctions that are highly nutritious as well as jaw-droppingly delicious. When made correctly.

Shockingly, I found a place. It's called Punk-Doily Pie Shop. It's not even that far from here. They make fruitcake. They make mince tarts. They will sell them to me!

I bought some. They are incredible, the way I remember them, they way the ought to be. Tucked in the freezer to be brought out a bit at a time, savored, until they are finally gone.

It's a fair walk or even bike ride to get there. A train is how a sane person would do it, but I am going to need to burn anticipatory calories, and I will go there to see what other delights they can present to me that will tug at my memories while tantalizing my tastebuds, taking me heart home. 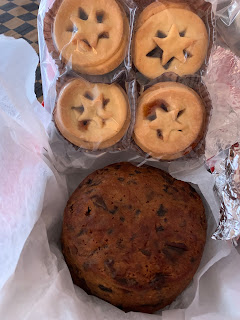 Mince tarts and fruitcake. They even look real! 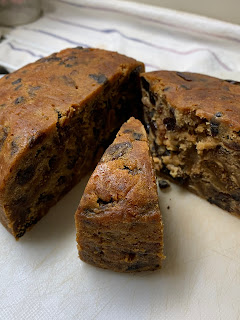 Fruitcake, from the inside. That fruit, and there's lots of it, has been swimming in brandy! 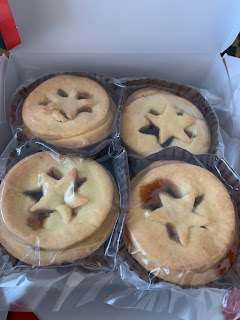 These gorgeous mince tarts have a shortbread crust. That involves butter. UK cooking at its best always involves booze and butter. Once a year, I'll deal with it. I don't pretend to be perfect.
Whatever holiday you celebrate, enjoy it. I like them all. Make merry! The sun will return and the year will refresh!

Posted by Claire Youmans Author at 12:51 AM No comments: