I am now free to move about the country!

Japanese laws are imprecise. Translation from Japanese to any language I can read, write or speak is extremely problematic. It's always incorrect. It's always vague. Frequently, words are used that do not mean what the Japanese think they do when rendered in the "translation conventions" that are used, incorrectly, all the time.

So when I looked into driving in Japan, it appeared that unless I was from someplace I was not, I would have to start from scratch, go to a fabulously expensive two-week sleep away camp to prepare for the extremely long and complicated Japanese written test. Oh, I can get it in any of about six languages, a couple of which I can read. But given the translation problems and given that the test is designed to trick you to start with, I held out little hope. Even though I could get my own room and food I could eat, I wasn't sure that even spending those huge sums of money and all that time would help me. Anyway, public transportation in Japan in wonderful.

Except when it isn't. Sometimes buses and trains just do not go there. Finding a car and driver to take you there is an almost insurmountable barrier, not to mention wildly expensive. My books are running far afield into areas of history, culture and adventure that are located in the "there" where public transportation does not go.

When I discovered I might well be able to take the short-form, don't-need-to-worry-about-it, written test and only pass the driving test, and I could be fairly well assured of the latter by hiring a private school or teacher for several driving lessons during the lengthy period between the written test and the driving test, I thought maybe I could try it. You can always take the test again. It's only about $35.00 each time. And a day trekking into the wild suburbs of outer Tokyo, as well as doing that for your lessons.

I also wasn't sure that I actually qualified for the "conversion of foreign license" method, because of certain timing requirements I wasn't sure I met. I also hadn't had the benefit of the year you can (probably) use an International Driving Permit (obtained through your local Automobile Association) legally because getting my visa was a lengthy, confused and confusing mess that took 8 months and a lawyer to resolve. I hadn't driven a car in over four years! Jumping into driving on the wrong side of the road did not sound promising. Even if I qualified.

I made assorted treks to various offices to get the Japanese items I would need. I mailed my US license to the Japanese Auto Federation for an official translation. I send off to the DMV for what I hoped would be an end run around one of the timing requirements, the one that worried me the most. I finished the draft of The Oni's Shamisen, sent it off for first reads, found a driving teacher who works with foreigners and is highly recommended, and took myself off to the Outer Suburbs, recommended by said teacher as being an easier location, to make the application.

They took it. But rather than give me a couple of months to take weekly lessons and be sure I knew what I was doing and wouldn't turn on the wipers every single time I wanted to make a turn, they wanted to give me a test appointment in TWO DAYS. I got that pushed out to TEN days with some effort. I managed to schedule TWO lessons during that time.

Today I left the house just before 6 am (yes, that is SIX) to get out to the driver's license bureau test site at the unearthly hour at which they had set the appointment—and if you are LATE, you FAIL. The trip required several transfers and long, bouncy rides on assorted trains and buses. Shocking how many people are riding the rails between 6 and 8 AM.  I had to pass the test if only to ensure I would never have to do that again!

Then we waited outside until they brought us inside. Renewals, written testers, driving testers, and other people with unknown business were sorted with ruthless Japanese precision and set off to various holding pens. Every once in a while, one of us would be called up to the window and they'd want something from somebody. This went on for about an hour and a half. There were about 25 of us, total, some doing automatics (yes, please) and others doing manuals. Finally, they split us up into smaller groups and took us down several flights of stairs to the actual testing ground. It appeared there were three little cars, two automatics, and one manual. One Toyota, one Mazda, and one Honda. They took us one at a time, rather than in groups of three at a time in the test car, switching off.

A charming college student from the US, who has family in Japan, said she had heard that they put first-timers at the end of the line. She and I and a VIP High-End Expat (who was extremely nice — I liked him) and a cute young man about the age of the US college student but from China (also very nice and she liked him), were all first-timers at the end of our line, so we had plenty of time to talk.

Our inspector was a middle-aged man, kind of unkempt, a little round, pleasant, kind, calm, sweet, and—lucky us—given to passing people.

Why was I scared? I'm a good test-taker. Aren't I? Haven't I passed two of the three most difficult bar exams in the US, first go, against rotten odds?  But also haven't I, dyslexic one, spent half a century driving on what is here, the wrong side of the road, and had insufficient opportunity to focus intensively on practice and study for weeks on end? Didn't I keep hitting the damned wind-shield wipers when I wanted to flick the turn signal? Didn't I keep bumping the curb on the right-angle turn series? Didn't I look in too many directions too many times? Oh, dear. Oh, freaking dear!

Actually, what I muttered not quite far enough under my breath, was "Oh, bloody hell," the first time I screwed up. I knew the wipers don't actually count against you, even though I did keep hitting them, but I BUMPED A CURB! On the connected right-angle turns! I backed up and went at it again, and supposedly that is not fatal, but I thought I'd bumped it twice and that's an automatic fail.

Oh, bloody hell. I blew it. I thought he was going to take me back to Start, which is where you go with an automatic fail. But he didn't. I wasn't sure why, but I kept doing what he told me, positive I had blown it and would have to do the whole thing again. But we got back, I stopped the car, and I watched him fill out the form.

Suddenly he extends his hands in the baseball umpire's classic gesture and said, "Safe!"

I now have a Japanese driver's license. Supposedly new drivers are to place special stickers on their cars. Mr. VIP's minder had us buy them. I got magnetic ones so I could put them on any car I might rent. There are other stickers, too, including one for seniors. I expected to move from Newbie to Geezer pretty seamlessly. But when I turned over my new license to put it in my wallet I saw that it is endorsed: Newbie Sticker Requirement Waived.

I am now free to move about the country! 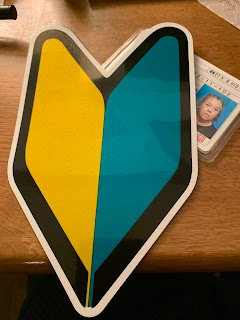