Since I last posted here, I have been frantically pushing to complete the first draft of the first draft of The Oni's Shamisen. I actually did so about four days ago. We're in a rest period now, where I catch up on all the things that need doing and haven't gotten done while I've been in the Meiji Era.

This compounded by the fact that fall is maintenance season in Japan. Most of it doesn't affect me, but at my building, when the weather cools off, all sorts of cleaning and maintenance chores begin.

The Drain Cleaning People need to come in to my apartment and spread plastic everywhere prior to snaking out every single drain in the place. It takes them about 45 minutes. They're extremely efficient and all the plastic they put down and take up means they leave no evidence of their passage. But I have to be here.

Did I mention the earthquake? We had a pretty big earthquake, with the horrible alarm blasting from my phone (in case I didn't notice?), forcing me to get out of bed and lurch across the rolling room to turn it off. Then the community loudspeakers came on and announced it (in case we might have missed it?) No damage here, though a couple of things fell over. There was real damage elsewhere, power outages and derailed trains. The Earthquake Authority put the intensity at my house at 5.1, which is pretty darned shaky.

This year, although this building is brick, they are doing outdoor painting. This was scheduled with each unit because the painting requires that your front door be propped open for priming and painting the trim so it can properly dry between and after coats. After posting all kinds of notices telling us we could request specific days during a range, and giving us forms to fill out, I discovered that was all irrelevant, as the choices were much more limited and the painter more or less told me which days were convenient. The paint is thick, oil-based and smelly, but it looks nice, and at least my bit is done. He is nice and efficient, but he's still working on various outside things and the paint does smell! The outdoor gardeners will be coming soon, and I will want to have my part done so they can clean up and take away what I dig up and trim.

Then there are all my usual fall chores, one of which jumped out at me due to a happy event: I was able to buy some custom milled organic beige (partially milled) rice straight from the farmer. I got 15kg, which I suspect is about a year's worth for me at 33 pounds. It comes in the mill's special big brown bag, which has nice pictures of rice on it, and travels at a special rate. It is now stored in my floor pantry, which is vented to keep it cool and dry, and is newly cleaned to house all this bounty.

One of the nice things about my apartment is that, while it doesn't have real rooms and is very small, it has "areas." I had to bring in a plant that can live outdoors in the warmer weather. It's quite large. This meant I had to move things around, and this resulted in re-arrangement of the area housing my Buddhist Altar. We normally offer cooked rice, and it's so lovely I wanted to take a picture of it. But since you can barely see it, I took a close-up. It is gorgeous and very tasty rice. To the left of the altar, you can see some apples. We also normally offer fruit. I also got a case, yes, a case of apples. These are the $5 each size at the grocery store, but because these are "seconds," and came right from the orchard in a special apple box, they were (calculating frantically) about $1.17 each, door to door. They're so huge, you have to have a party to consume each one. And they are equally wonderful. Most of them have been frozen against future use. 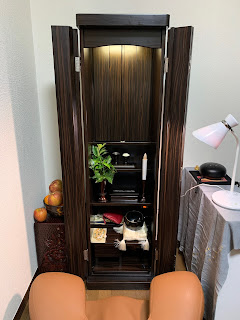 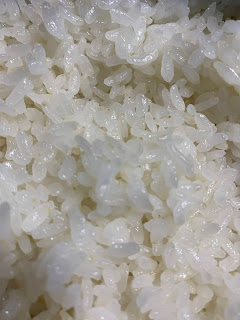 My friend Susan Spann had a wonderful trip to Hokkaido for more climbing and hiking (which she loves and writes about). She brought many wonderful things From Hokkaido With Love, owned by the Hokkaido Nature Tours owners, nice people who are well worth knowing. Some things were shipped, and I have some bounty awaiting our next meeting, but some she brought, and that included these wonderful Oni Socks. I love them, and they strongly resemble Kukanko-chan, the Oni character from Coming Home (Book 1) who reappears now in The Oni's Shamisen, which will be book 9. They give me inspiration! 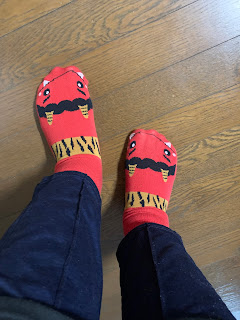 I received a flyer from people who clean HVAC units and fan ducts. Although I clean the inside unit regularly, there IS a big outside unit plus several fans and ducts and I wanted them cleaned. I think we're in for a cold winter, so I didn't want things to break during the middle of it. There was a sale, and supposedly they were going to be in the neighborhood on a specific day. This is a tenant's responsibility here, so I signed up. Except I had to schedule a completely different day, and though the are running a special, that amount covered only part of what I wanted done, so it turned out to be expensive. And the day turned out to be yesterday. They were actually early, thorough and pleasant, and again put plastic down everywhere so you couldn't even tell they'd been. It took them a long time! One fan will likely have to be replaced (not my job, it seems) soon, but everything else is shiny clean and working beautifully. My eccentric way of learning Japanese continues: I now know a great deal about HVAC equipment, how it works and how I should work it, more things not taught in language schools.
But yesterday I also needed to go to JP Bank and pay my rent. I suppose I could figure out how to do it on line, but it's all in Japanese and I just haven't wanted to, yet. There are post offices everywhere (JP is Japan Post) and ATM machines abound. I needed a new phone card (that's complicated) and those are only available at Family Mart, for reasons unknown to me, so off I went to the post office a block from the closest Family Mart. Missions accomplished, and before it started raining.
When I got home, my hall light flickered and went out. That's the only source of light in the hall, which contains doors to the laundry room and beyond that the bathroom, a storage closet, and my auxiliary kitchen, home to the hot water pot, the rice cooker, the air fryer and the blender, all on top of my fabulous wonderful trash and recycling cabinet, since the actual kitchen area has no outlets and no counter space, either.
Wait! I have lightbulbs! I got extras when the bathroom light went out and I replaced that bulb and the one in the laundry room with brighter ones! This will be easy.
Nope. The bulbs will not work in the fixture. They won't screw in. I do not know why. I spent far too long examining the bulbs. It's a recessed pot-light fixture and even with a flashlight, I couldn't really see what's going on up there. Finally I realized that, Japan being Japan and very risk averse, it was entirely possible that the only kind of bulb that would fit the fixture was a specific size, and it did not seem that I had one of those. If I wanted the HVAC people to be able to see, I would have to go on a light bulb hunt. Preferably before it started raining.
I thought I'd seen some at Tobu, the closest grocery store. A short way beyond that are a 7-11 and another Family Mart. Surely at one of those...nope. One of them had LED bulbs, but I had those at home. We already knew that wasn't going to work. I headed towards the shotengai (shopping streets, like several covered blocks of mall) on the way to Kamata station. There were electronics stores there, I knew.
On the way I stopped at the Life Store, a grocery store with a variety store attached. They had a bulb that I thought would likely work but it was only a 40, like the one I'd taken out. I consulted with a clerk and she agreed it would probably work, but suggested I keep going to an electronics store she recommended. I bought the bulb and I went on. Although the electronics shop woman hoped to sell me LED bulbs, which are popular here as energy saving, I explained that those would not work. I had tried that. She located another 40 and a 60! We agreed that the screw-in part was identical to the bulb I had although the shape was different. I said I was sure it would fit the fixture. I bought that one, too. Got it home, just as the rain started. Screwed it in. It FIT, and furthermore, it WORKS!
Lux sit. That is the motto of the University of Washington: Let There Be Light; the only Latin known to most Seattleites.
I don't go to classes and I don't do on-line courses, but I do live my life in Japanese, learning as I go, many things that are not taught in schools. And...lux sit. 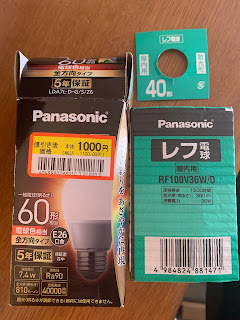