In The Shadows of War, the Satsuma Rebellion affects everyone, running from January through at least the autumn of 1877. This period finds my characters facing the conflicts and hardships of a civil war in their area while trying to move forward in their lives, despite it.

This is echoed in Japan as a whole, where the Empire focused on crushing the Rebellion decisively on the one hand, no matter what the cost, and, on the other, showing an entirely different face to the world as it still grappled for a permanent position among First World Powers.

World's Fairs or International Exhibitions were wildly popular during this portion of the Industrial Revolution. These began in the first half of the 19th century, but grew exponentially during the 1860s and 1870s, happening all over the world. Western people were fascinated by the cultures, arts and aesthetics of all the new-to-them wonderful places in the world! Travel was now possible for the adventurous and well-heeled. Those who couldn't go were excited to learn, either by reading the stories of others or perhaps even seeing what other nations might bring to these International Exhibitions, which were held much closer to home.

Inventions burst out all over. Manufacturing innovations and exiting new modes of transportation blossomed. International commerce was easier than it had ever been, and that meant leaps forward in economic activity. That this largely benefitted colonial powers was not lost on Japan, which had so far successfully resisted being placed on the unfavored side of the equation.

Japan participated in many Worlds' Fairs as an exhibitor, promoting its arts and culture to create a thriving export trade. It hosted its own in 1872 in Kyoto, as an Exhibition of Arts and Manufacture. But what Japan wanted was industrial trade. Selling ceramics and art works and textiles was all well and good, but the big money and the big power was in industry. From August 21 to November 30, 1877, a huge and unprecedented exhibit was held in Ueno Park in Tokyo. The idea was to repeat this kind of exhibit every five years to showcase Japanese ingenuity and develop international manufacturing and industrial trade.

Many of the buildings are still in place, though they've been renovated, of course, and some have been replaced.

One of the major new items shown was Tachi Gaun's Cotton Spinning Machine. That led into an interesting area of Japanese and international patent law, but of course Maeda Azuki, the Toki-Girl, doesn't know much about that. What she does know is that this device will make the production of cotton fabrics on an industrial scale by new small-scale local collective operations possible. She must go see it!

Which meant I spent over an hour trekking to the National Museum that now occupies the buildings, or their replacements, that date from 1877 and some subsequent Exhibitions of the same kind! 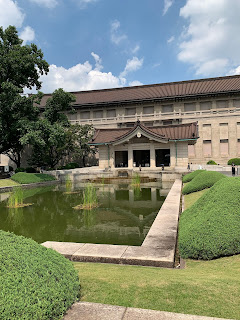 The main art museum. Yes, it is very good! One must make reservations and get tickets on line. That means it isn't too crowded. Temperatures, hands and masks, of course. A statue of Kannon from Shorinji in Nara, dating from the 8th Century was on display with similar treasures, including some interesting history of how things got moved around in the Meiji Era when Shinto and Buddhism were separated, and why. See The Eagle and the Sparrow for insight into this happenstance. 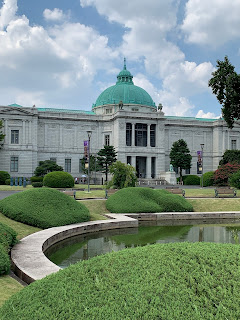 The Hyokeikan building houses exhibits relating to archaeology and now has a special exhibit from
Horyuji Temple in Nara, including some items are not normally on view, and some VERY cool high tech new ways to see old things better than you could in person. The exhibits included one special one on Prince Shotoku, who is credited with brining Buddhism to Japan, with items rarely shown. 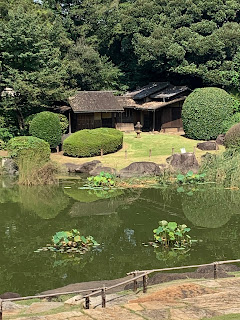 This is the art museum's garden, beautifully maintained since it was constructed in 1877 until, well, yesterday. It's very large and parts of it are not currently open to the public, but the terrace is open and it is lovely. I could have wandered farther, but I wanted to go back in and see another room with Ainu and Ryukuian exhibits. 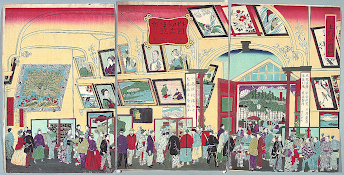 This Hiroshige Tryptich shows the interior of the art museum during the 1877 exhibition. 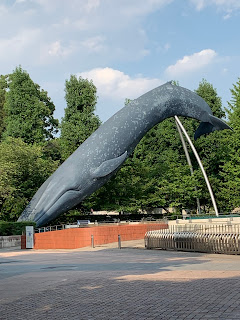 This gorgeous life-sized blue whale sculpture sits outside the Museum of Nature and Science, renovated and rather boringly modern. This museum was originally established following the First Educational Conference, which is when Maeda Yuta (Sensei) met the kunoichi Noriko.
Yes, there is much more! I hope to get to it, but I also have a book to write.

Posted by Claire Youmans Author at 8:08 PM No comments:

In the cool temple hall

The priest sounds the bell to honor the deceased.

Outside, cicadas screech their raucous song. 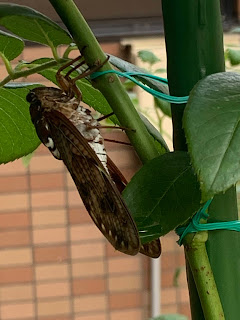 Posted by Claire Youmans Author at 2:04 AM No comments: