Todoriko, Walking the Valley in the Rain, with Steps

There's a hint of a light at the end of the tunnel. Vaccine appointments in my area were supposed to open up this morning. I received my card yesterday. I got through to the web site, but everything was fully booked, I discovered after a fruitless while. I can try again next Tuesday. June 1, the Tuesday after that, 200 more venues (hospitals, clinics and medical centers) are to open. Two more kinds of vaccine were approved for use today. So sometime within the next I don't know how many months I might be vaccinated. It is maddening and saddening and depressing. I had hoped to be able to start the travel/research portion of the next book. But no, not as scheduled, not as planned, and I have no idea when I'll be able to do so.

The rainy season seems to have started early, so it's raining not all day every day, but often enough and always cloudy, and when that's done, we'll be slammed with steam-bath summer on top of the grinding humidity that will go on for who knows how long -- sometimes in September, if we're lucky.

I feel constrained, restricted and trapped. I can't even get out to play in my tiny garden while it's so wet. Already the humidity is so high the air feels saturated and it can be almost be hard to breathe, especially when climbing far too many stairs. I have a thing with stairs. A serious karma issue here. I can't seem to get away from them.

Maybe I could change my mood. It wasn't raining every single minute. I stuck an umbrella in my pack together with my hiking poles, hopped a train and went for a walk. Not all that far from here is a most unusual valley through which runs the Yazawa river on its way to the much larger Tamagawa. It's etched a ravine that shows off geological details, has a wide range of forest habitats, an attractive temple, some pleasant small shrines, some historical ancient tombs, and is known for being several degrees cooler at the base by the river than at street level.

It was fifty plus steps from the street to the river, so that'll give you an idea how deep it is. Yeah, stairs. I should have known. 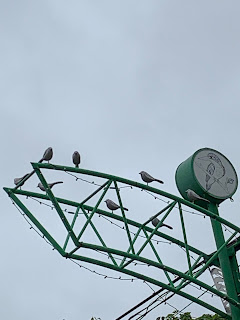 Of course, there is a shopping town between Todoriko station and the park entrance. Those are not real birds. Although there are plenty of pigeons in Tokyo, there aren't really as many of them as one might expect, and apparently aren't enough birds in general. These are sculpted birds, a neighborhood mascot and valued resident, it seems. I think these are azure-wing magpies (onaga) if I can decipher both the colors on the picture surmounting the usual shopping street sign and lamp bar, and what a nice neighborly woman said to me. Just as it started to rain.  Again.

There's a handy thermometer that tells you what the temperature difference is between above and below (about 2.5 degrees C today), just before you descend many, many stairs to reach the river below. There you start along the narrow path that winds along the bank to go under what's called Golf Bridge, because there used to be a very large golf course close by, a hundred years and more ago. 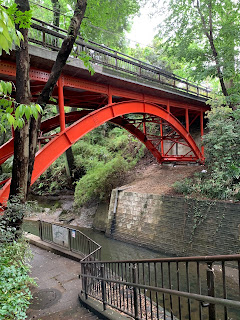 Here you can see the geological layers that tell the history of this ravine. There's a sign that explains them but I didn't feel like memorizing it and didn't think to take a picture. I was thinking about people coming out here to play golf and how this has become a pleasant part of Setagaya, part of the 23 Wards of Tokyo.

Further walking follows the course of the river past some mound tombs that might have been interesting if they hadn't been blocked off in enclosures for now and a little museum, closed for COVID. There weren't any turtles in the river, which interested me. I expect the place teems with mosquitoes in the summer, as indeed a sign warned me that it will. I heard no birds, which surprised me, and I saw no wildlife, except a couple of college students. It's close to a Tokyo University branch campus.

I did see the foliage zones that range from Zelkova trees to marsh grass at they go up the sides of the ravine. It's well marked. There's a sign that explained it all, but once more I forgot to take a picture. It's pretty, though. 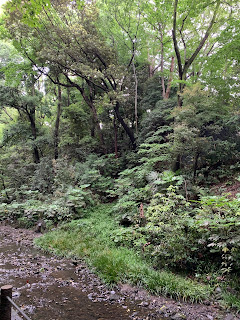 The park ends before the Yazawa reaches the Tamagawa, and, having climbed many, many, many stairs (at least five full flights; maybe it was six) to determine that the classically attractive temple is mostly closed for COVID, one can either walk back along the streets of this pleasant neighborhood or descend to retrace one's steps along the bank of the river. It started raining, though not badly enough for me to pull out my umbrella, so I stuck to the streets. Anyway...stairs.

I got home just as it started to pour again, so that's something.  And here, at least, there are no stairs!

Posted by Claire Youmans Author at 2:41 AM No comments:

The Shadows of War is out.

This link will take you to Books2Read.com, where you can connect to virtually any book retailer that has a presence on the internet -- Kobo/Rakutan, Gardiner's, Scribd, Apple, B&N, so many more, plus the obvious 1800 lb. gorilla your mind probably goes to at once -- and get your own copy, in e-format or paperback.

Any bookstore anywhere can order hard copies through Ingram Spark Lightning Source as it orders any other books, Ingram being the main supplier of brick and mortar bookstores everywhere around the world. Except in Japan, where they are a pain in the neck, though bookstore orders are possible. Seeking better hard copy distribution in Japan, BTW, in case you know somebody.

Don't forget that your local library can order both e-format and hard copies through its usual ordering channels. Libraries are absolutely wonderful about ordering books at patron request. Ask! 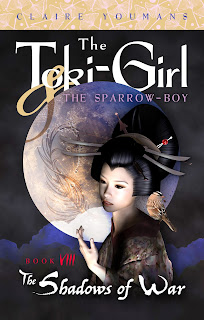 What am I doing now? While the next book starts to bubble away in the back of my head?
Advance Review Copies are now available for free. You can get one until June 5; just ask. We can't make it a trade for an honest review, but we can grovel, beg and plead. Publishers get maybe 1 review for every minimum 500 ARCs they send out, and far fewer from actual sales. It's pulling teeth to get people to review, but it means so very much!
Requests for editorial reviews are going out -- these are from publications that review books. These are different from ARC reviews -- and advertising is brewing.
So, yes, there is quite a lot to do, and I'm doing it.
The publication process, so far, has been easier this year; I am not sure why. The internet is still buggy as all get out, and I hear reports of entire categories of books lost for weeks by on-line systems, but it's done sooner than I thought it would be.
Smaller victories also exist. My garden grows, and I harvested an eggplant! Already! I'll have a piman any day. Tomatoes are coming along. My neighbor's goya (bitter melon) plant grows while you look at it. My cucumber shoots up, but not as fast as the goya. Thyme, sage and rosemary are flourishing. There will be shiso, nasturtiums, lilies and more roses as the rainy season descends upon us early this year.
Any day now, I hear, I will receive a ticket that will allow me to spend untold hours attempting (in Japanese) to get a vaccine appointment sometime, and the second one to follow. Maybe that will be easy, too. I hope so. I don't want to start the travel portions of my research for the next book until that's done, so easily and quickly would be nice, yet while all the domestic travel discounts still obtain.
My Long Term Care helper service will terminate in two weeks. I have another three months coming under the current contract before it's reevaluated, but I don't really think I need it any longer. My spinal fracture has healed and I can once more do what they do for me. Since this is a subsidized service -- we do pay premiums for it -- I don't like using it if I don't actually need it.
This one really is a surprise! I got a credit card. A Japanese credit card! I had heard these were very hard to get and since my visa is only being renewed annually so far, I didn't hold out much hope for my success. But I am also sick and tired of foreign transaction fees being charged any time I have to use a card to make a purchase, which is any time I buy anything on line, and what with all the States of Emergency and Covid and all, that's all the time!  Although they called me any number of times to assure themselves that I really am a writer of books, to verify that I do have an actual income, and I really have a genuine Japanese visa without a job or a Japanese spouse, they came through and so did the card. It is paid by magic through my Yachin (JP Bank) Account) -- something I wanted and asked for. Japan is leaping from all cash to all automatic payments with no middle stop, it seems.
They also sent me an ETC card so I can whizz through highway toll booths without stopping. Although I toy with the idea of getting a license here so I can rent cars (I would not own one), I keep running up against the cost and difficulty of doing it. Plus, two-week sleep-away camp with a bunch of foreign college students does not sound very appealing, and that's the best way to make sure you actually pass. Yes, I could have my own room. It sounds like I could get food for difficult, vegan, me. But, still.
While I have plenty to do, including some rather long and academic tomes to pursue, and further adventures into the interesting world of Shaolin TaiChi/QiGong to improve my health, and hopes of actually riding my bike again, it feels like my time is oddly unscheduled and uncommitted. That's this week.
There is also something else quite lovely, literally. My incredible cover designer made something that can be used for merch and shirts (which an American friend can make! Advise if you want one! They're reasonable, too.) and I'm going to see if I can get it in a form I can have framed because it is -- well, see for yourself. 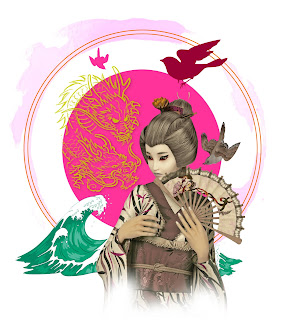 I'd call that a victory!

Posted by Claire Youmans Author at 10:15 PM No comments: