Flowers are coming out everywhere! The lauded sakura are early in Tokyo this year. March came in like a lion and is going out like one, too. It's raining, again, and that may well knock the petals off the trees early, too early. It's like Seattle, with chilly sideways rain knocking over my flowers and I'm stuck inside when I'd rather be engaging in hanami. That's flower-viewing, and while it can apply to other flowers, at this time of year, it refers specifically to the flowering cherries called sakura.

Ota-ku seems negligent in cultivating sakura. On my regular beat, there simply haven't been any. I have seen some along the Meguro River, which is beautifully lined with them, from trains, but in the places I often walk, I simply haven't seen any.

Friday I went to Mont Bell, sort of the Japanese REI, with a friend who is an expert hiker to drop a lot of money on hiking poles. I do want to start hiking, as in walking on trails in nature. The spinal fracture has healed, the QiGong, the Real Deal Shaolin QiGong, is serving as excellent physical therapy, and serious hiking seems to be in the realm of possibility. I mean, if I can walk several miles a day in regular shoes in the city, I really should be able to manage some outdoor trails. My goal is not to be able to do it once, one day, and then pay for it for several days thereafter. I can already do that. I want to be able to do it many days in succession. There are trips I want to take and books I want to write that involve perhaps 6-10 miles per day, more or less indefinitely.

However, this endeavor comes at a cost. It seems there is equipment required. For now, I can get away with walking shoes; I needn't invest in serious boots. That's good; I don't think I want to do anything that would require serious boots. I do have a day pack that looks pretty citified but is good quality and comfortable and will work. But apparently I require hiking or trekking poles. No, my wildly expensive, high tech, shock-absorbing, adjustable ski poles will not do. I can't just get something to cover the point, no. Yes, I do need a pair of them, despite the fact that I have a single, with kind of a hokey ice axe included, that I got in Korea.

I now have them. They're everything you could possibly want, if you want the greatest, newest and most advanced poles possible. I played with them a little on the way to a restaurant where we celebrated with lunch. Yesterday, Saturday, it was not raining so I took them for a spin.

While you'd think it would be close to using poles to walk on skis, especially XC skis, there are significant differences. For one thing, you don't glide. For another, there's a little wrist flick motion you have to use to get the pole out ahead of you, else it feels like you're tottering. You have to -- or get to, depending -- fuss with the length depending on slope and angle. Yes! Outdoor tech!

I took them down to the Tamagawa, and there, at last and in full glory, I found a stretch of sakura! Fifty minutes and three miles, according to the Helpful Watch, and I think I'm starting to get it. I'd go again today, but everybody knows the Wicked Witch of the West melts in the rain! 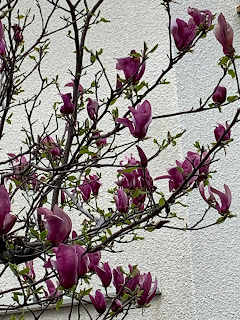 A magnolia exploding into bloom. 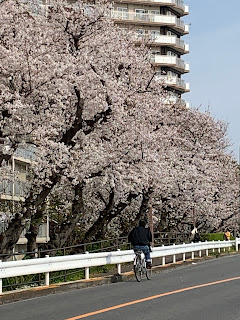 A stretch of sakura in riotous glory on the road bordering the Tamagawa. 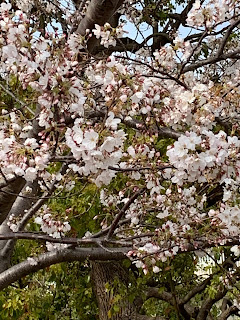 Up close, personal and gorgeous! 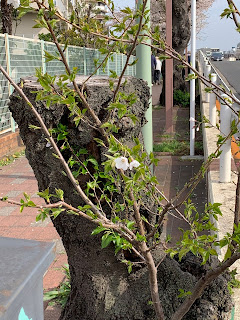 Can't keep an old tree down. 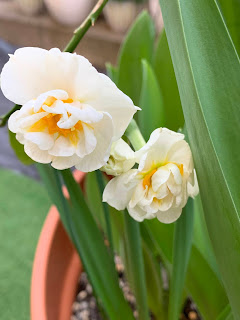 Some of my narcissus.

Posted by Claire Youmans Author at 11:27 PM No comments: