I first met writer Susan Spann online, when she was preparing to come to Japan just as she completed treatment for a rather nasty type of breast cancer that had attempted to derail her plans. As a survivor of some 34 (now 37) years standing, and a writer who had just obtained a visa in a new and odd category that allows me to live in Japan to write books, I felt a great kinship with Susan and reached out. If she needed a friend and ally, I figured, she had both in me.

Susan hoped to come in on a journalist's visa to write a book on climbing the hyakumeizan, Kyuya Fukada's famous list of 100 sacred mountains in Japan, within a year, and setting a couple of records in doing so. Since my visa category was brand new, narrowly defined, and I had a heck of time getting it, I watched the proceedings with interest. Over the eight months it took to get my visa, I spent more than a month in Korea on separate trips while waiting anxiously, taking a great boat trip, seeing lots of World Heritage sites and other interesting things, and getting research material that resulted in The Sparrows of Pusan. Susan's longing for Japan was as great as mine and her anxiety at least equal, so my heart went out to her, especially given her health at the time.

Her initial application was denied. What she was proposing wasn't journalism. I am a retired lawyer, as, now, is Susan, and I didn't like the advice she was getting. I thought she'd fit into this tiny, obscure and new visa category as well as I did. I put her in touch with my immigration lawyer. He's very good, and this time, with the new category, her application was successful.

I like Susan. She writes nicely crafted and culturally accurate mysteries (the Hiro Hattori series of Shinobi mysteries) occurring about two hundred and fifty years before the Toki-Girl and the Sparrow-Boy come onto the historical scene in the Meiji era. I enjoy them and look forward to each successive one. I liked her proposed project. I liked her guts. I understood the emotional landscape in which she stood. We became IRL friends and I followed her hyakumeizan project from its inception to the publication of Climb, the resulting book.

As I read Climb, I remembered so many of the things she describes from when they happened. Yet, I felt them each anew, as I followed the journey of a remarkable woman wrestling with demons, determined to achieve a remarkable goal. Even though I had watched her change, her blossoming, her improving health, her progress despite continuing obstacles, as it happened, Climb is an intimate memoir that brings increasing understanding of how courage, persistence and dedication to a goal can create change in not only one person but can inspire others to fight their own demons and realize their own dreams.

Yes, you'll like Susan, too, and want to go along with her. Her journey is personal but will leave you inspired to Climb for yourself. 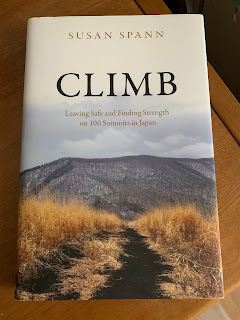