Book 8: The Shadows of War

In 1877, Japan was doing two things at once: it was expanding its international presence, its overseas export markets and its capital to continue its plan of securing its place on the world stage as a top-table player.

It was also fighting a nasty civil war, between those who thought the nation had gone too far in appeasing the west, to the detriment of its traditional values and its citizens, and had become corrupt in doing so, and those who thought that appeasement and whatever else it took to become and remain a first-world power was worth it.

Satsuma, the province in the farthest south portion of Kyushu, had long been fairly independent. It looked south and west, had overseas trading interests (and didn't much care if they were "legal") and though it promoted and supported the Meiji Restoration, wanted a bigger say in how that was carried out and carried forward.

One of its great statesmen and soldiers was Saigo Takemori, who had a huge part in the Meiji Restoration. Saigo was a national figure, widely respected then and honored as a national hero to this day. Of course, he has now joined the pantheon of kami and I have visited at least one of the places where his soul is enshrined.

He has also become, in popular thought, everybody's beloved Uncle Saigo, known (among other things) for his devotion to his dogs, has turned into kind of a local mascot, and hawks everything from wine to, naturally, dog food, treats and supplies.

The politics is complicated. Despite diligent research I don't know how close I have come to understanding it. Nor do I have any real idea of the ways, though I suspect there were several, people understood and reacted to the issues of the day. What I have is bare-bones history.

What history tells me is that Saigo started military schools for samurai boys all over southern Kyushu. These boys were being deprived of their social status, jobs and incomes. A National Military was formed that any boy or man could join and many were required to. These, and their interaction, are part of The Eagle and the Sparrow.

Eventually all this came to a head and things got, well, bad out. The words I use here may not accurately reflect how the situation would have sounded to a Japanese person or been understood by a Japanese person at the time, but they are the best ones I've got. Satsuma succeeded from the Empire. Students from the military schools started and participated in conflicts. Saigo felt he had to defend and lead them. Saigo wanted to "confront the Emperor," which could mean a lot of things, but never got the chance. A full-bore civil war broke out in the south of Kyushu. After many months and much fighting, the rebels were defeated. They fought hard and well against impossible odds almost to the last soldier. Mortally (maybe) wounded, Saigo committed seppuku (probably), and that was the end of that.

In 1877, then, the people of Kyushu were living under the shadow of a conflict that lasted from January to the end of September. Uncertainty, instability, destruction, conflict, inflation, refugees -- all of these plagued not only the people of Kyushu but because of conscription for the massive National Military and the enormous cost of this war, affected people all over the country.

My poor characters, at home in the northeastern part of Kyushu, lived close to the thick of it. Though not affected directly, indirectly they were touched both by the proximity of the conflict and the national issues that arose from it. They also have problems both because of and independently from the internal strife and the juxtaposition of that with the outside aims of international national interest. This is all immeasurably complicated by the fact that many of them aren't entirely human, and some of them aren't human at all. 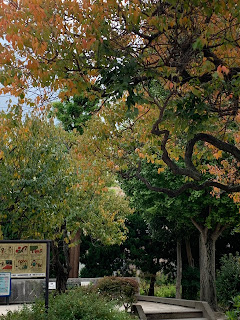 Even during the roughest times, people do find ways to build and grow, to learn, to enjoy, to master new skills, to adapt to change, and even fall in love. They cope. They manage. They survive. They prosper. This is one of the great strengths of humans, and especially the Japanese. Things are not all bad. There is more than a little that is good, new, exciting and wonderful. 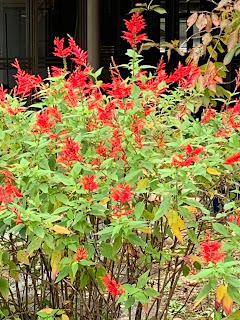 Yet, over-arching everything, I find as I struggle to make sense of the first draft of this segment of their adventures, is the grim pall of war. This is why the tentative working title of Book 8 in The Toki-girl and the Sparrow-boy series is now The Shadows of War. 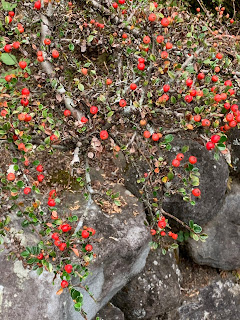 Growth and change, birth and death, and always beauty: here are some autumn pictures, including a couple from the pocket park across the street. 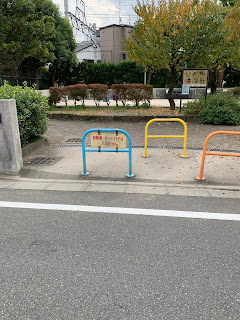 Posted by Claire Youmans Author at 12:16 AM No comments: