The Mines of Moria

Last night, I fell over exhausted and slept for eleven hours. There was no objective reason for this. I was a little short on sleep because I had to stay up very late to talk to the IRS in the USA and they're only open during my night. But all is (mostly) resolved and though I will have to make another midnight phone call, it should be a simple one.

It was a fairly busy day, but not inordinately so. I am no more stressed than I ever am when trying to write the first draft of a book, when I resent every interruption and distraction as taking me away from the highly focused concentration I need to go live in the Meiji Era and figure out What Comes Next in the stories of my characters. Yet, I just dropped over and conked out.

Japan is coping well. Japan adapts, adopts, figures things out and goes forward. This doesn't necessarily happen smoothly but it does happen. At least Japan acknowledges change. This does not seem to be happening in the US, where people continue to scream, whine and cry about "returning to normal," which simply point-blank is not going to happen. I'm trying to avoid getting embroiled in that. It's so horrible it's even lost the fascination of some disaster you can't tear your gaze away from. I just can't watch. Joseph Conrad's "The horror! The horror!" comes to mind.

Evel, a wonderful cat I was privileged to know, would look outside sometimes and get this look on his face. "It's all too weird out," his expression would say, and he would retreat someplace that wasn't.

That's how I feel. I think that's how everybody feels. I think I have weirdness exhaustion. 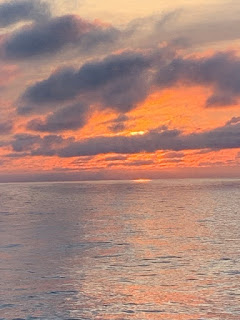 I'm trying to be normal. I'm trying to stay sane. I pursue my work. Despite the utter mess of book publishing, selling and even buying right now, I plod on, concentrating on writing the best book I can. If there is little I can do about getting my books out to readers one way or another, I can at least write a new one. At that, I am trying my level best. I am healing from an injury, and that's going to go on for a while. So again I plod on, and will continue to plod on with exercise, more exercises, braces, appointments and so on. The minutia of life continue daily. Plod on. I continue my Buddhist practice, of course, because without that I could easily sink into a pit so profound I might never get out. I'm far from perfect, but at least I am consistent and doing the best I can. What I have learned over the years is that the best you can do it the best you can do, and the best you can do is always enough. Plod on.

We have entered the metaphorical Mines of Moria. There might have been wonder and joy here once, but it is lost in the horrors of pandemic, political upheaval, social unrest, the ripping apart of America and incipient wars everywhere.

The only way out is through. We can't go back. That way is blocked by the very universe itself. Even the dragons can't turn back time.

We have no choice but to keep going. We must plod on, step by step, as best we can, looking towards a future that is no doubt going to be different but we can't make better unless we get there. Plod on, one day at a time, one step at a time, doing the best we can with each one.

The only way out is through. 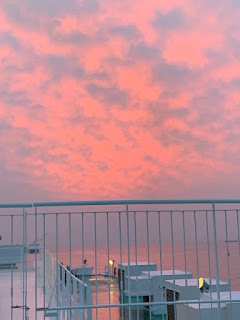 Sunrise photos taken at sea.
Some things will continue to bring joy!

Posted by Claire Youmans Author at 9:46 PM No comments:

My uncle, David Youmans, died last week at age 95. He was really top notch in the uncle department as far as I am concerned. When I needed him, he was there. We corresponded, we read each other's books, shared stories and talked about life, the universe and everything. I haven't lived by most people's templates, but Uncle David always supported my choices, no matter how odd they seemed to him, and some of his choices seemed odd to a lot of people, too, no doubt. They were always interesting, though.

I'm going to miss his presence in the world. So are his colleagues, friends and above all his family. Besides his wife, my aunt, still living though not well, his three children, their spouses and SOs, and their children, grandchildren, and extended families, he's missed by a large contingent of nieces and nephews, their spouses and SOs, children and even grandchildren. It's a pretty large crowd.

When my father died, there were services held all over the US and the world in almost every possible faith. For Uncle David, of course, I will do my part of the same, as I have done for, well, just about everybody I have loved who has gone before.

I live in Japan and I am a Nichiren Shoshu Buddhist. I've mentioned before how much milage we Buddhists, living, dead and reincarnated all, get out of memorial services. It's a great cause towards enlightenment for the decedent and the offeror, and restores and maintains connections like nothing else I've ever experienced.

Today, the first day I could, I had one for Uncle David. We're pretty loose about having services, because we like them, but it's not quite a free-for-all. There are a few rules and several customs, mostly common to all Buddhist sects. I'm sure it interested him and I hope it'll interest everybody else. His name will be inscribed in our family Memorial Book, so he'll be remembered every month in home services. Like I said, we get a lot of benefit, both tangible and intangible, out of this so we do it a lot!

My Temple in Tokyo is Myokoji. It's an old Temple, though the buildings are new and architecture modern. It has a cemetery and a Nokotsudo. That's a columbarium where ashes of the deceased are kept for those who do not have family sites. Remember, cremation is the way it's done in Japan.

Every month, on the first of the month, Myokoji holds its Monthly Memorial Service. Honored are all those members of the Temple who died during that month, no matter how long ago, whose names are recorded in books. There are many books for each month by now. Of course, anybody who wants to can offer a memorial service at the same time, and besides Higan-e (equinoctial) and Urabon (summer; also called O-Bon) group services, you can offer a service any time you want: anniversary dates, Mothers' Day, Fathers' Day, birthdays, or whenever the spirit moves you. Further, you can offer services at any temple, pretty much whenever. Those who have gone before never leave us. Uncle David is getting several: at least one in the US, at my family's Temple there, at Taiskiji, the Head Temple of Nichiren Shoshu, in Japan, and had his first one here, today, at Myokoji.

A Toba Kuyo Memorial Service is pretty simple. A Toba tablet is inscribed. It has the name of the person, the name of the person offering it, a few other personal details, the Daimoku of the Lotus Sutra (Myoho Renge Kyo) and a dedication. This is all in Japanese. This is a simple form of Stupa, a stone sculpture erected as a memorial. This is a great cause for all concerned in Buddhism. If you can read Japanese, you'll see Uncle David's in the middle, on the left. 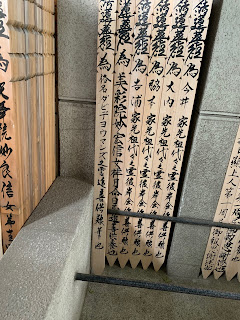 The actual ceremony, in the Temple, can't be photographed. Excerpts of the Lotus Sutra are recited, the Celebrant Priest offers incense in honor of the deceased, then everybody else does. Daimoku -- Nam Myoho Renge Kyo, which is the invocation (one might say mantra) central to Nichiren Daishonin's Buddhism -- is recited. Specific offerings are made (they aren't prayers in any sense Westerners understand that word though it's often used in translations.) Then the service is concluded. As one might expect in Japan, the more, the merrier, so everyone's offerings for everybody are honored and the effect multiplies. Then the Toba themselves are taken outdoors. 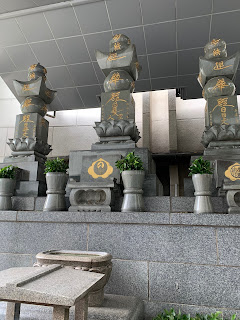 Every Temple with a Cemetery, and some without, has a monument to the Three Masters. That is for Nichiren Daishonin, in the middle, Nikko Shonin, his direct heir and the first High Priest of Nichiren Shoshu, on the left, and Nichimoku Shonin, the second High Priest of Nichiren Shoshu, on the right. Without them, we wouldn't be here. Those are stone Stupas and have symbolic meanings too complicated to write here. Offerings are made here in gratitude to them. This is also where offerings can be made for those whose ashes are in the Nokotsudo, behind this monument, in other places within a cemetery, or for those whose ashes aren't here at all but who have Toba offered for them here. 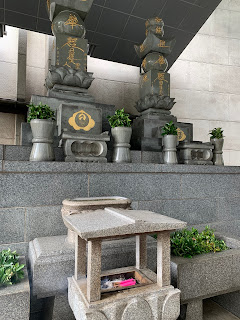 This is another view. You can see how shikimi greens are offered here (we don't do flowers; shikimi is a fragrant evergreen) and also bundles of incense. The offering of incense has great symbolic significance. 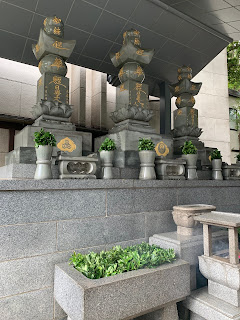 This is another view. This is a view of the cemetery proper. Some very dear friends of mine kindly permitted me to take a picture of their family site. While there are some more or less standard designs, you are welcome to design your own, and, being incredibly creative and talented, they did. The only necessary commonality is that Myoho Renge Kyo is engraved on the central monument, which rises out of a lotus blossom. Information on those whose ashes are below (there's a chamber beneath each such site) is carved on a stone tablet. People here maintain their own family sites, and my friends were actually in the process of doing so, which is why you don't see the shikimi.
I do hope my cousins who wanted pictures of the service here will like this expanded account better and that anyone who reads it will come to an understanding of what we do and why we do it, and of the great beauty and meaning involved in honoring those who have gone before the way we do it.
I think both the service and the telling of it would please my uncle. Oji-san is "uncle" in Japanese. In Japanese, one rarely says "sayonara," or farewell, so I won't say it now. A usual leave-taking is more like "See you later," which translates as "mata ato de." So, mata ato de, Oji-san. See you here again next month.

Posted by Claire Youmans Author at 12:52 AM No comments: