Oni and Hell Valley. Pictures, plus an Only in Japan

Near the town of Noboribetsu in Hokkaido is a national part containing Hell Valley.  Hell Valley (and there's more than one, another being near Beppu in Kyushu) is considered to be an entrance to the Shinto underworld, which is very like the Greek version, in that it isn't punitive, exactly, but it's not a whole lot of fun either.

The entrance is guarded by Oni. This word can mean demon, ogre or any other fierce looking large colorful being.  Boy Oni are mostly blue. Girl Oni are mostly red -- though a statue of a red boy Oni is below. Don't ask me why. 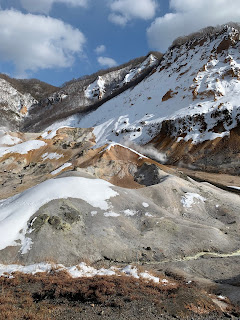 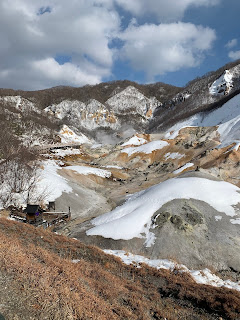 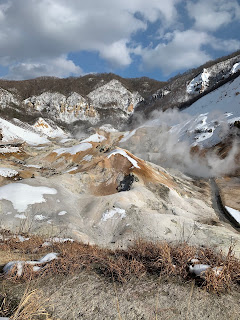 Hell Valley is preceded by a cute little town that hosts many hotels and many shops featuring Oni-EVERYTHING. That grey shop in the photo below is a specialty shop offering pet toys, mostly Oni. 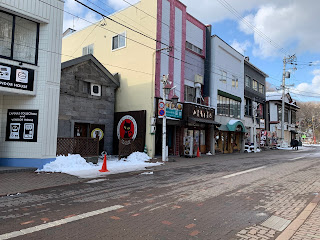 Here are some Oni. They range from the fierce to the cute, the scowling to the smiling, and sometimes, as mascots, they are almost unbearably cute, lovable and happy. 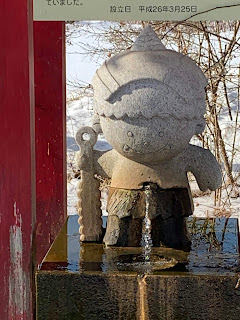 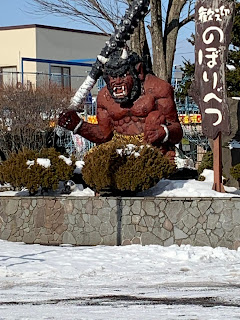 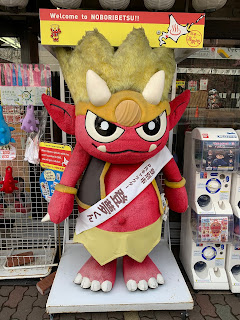 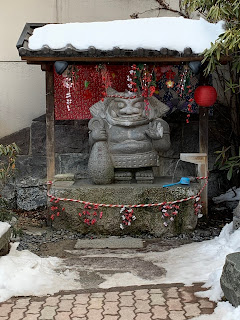 Besides the Oni, I found a statue of one Hokkaido version of Little People, koropokkuru. 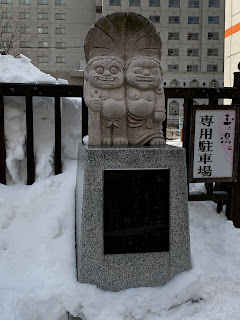 This pair seem to be conflated with Oni.  This version of the Little People, who are found everywhere in the world, are about three feet tall, mostly, and live under the butterbur plant, which has enormous leaves and is found everywhere around here. This is a very interesting piece of folklore, to be explored in detail elsewhere.

Oni are absolutely everywhere.  Every school's mascot, every factory's signature image, every restaurant's sign.  This goes right along with the expanded role of Oni in Japanese folklore: some are evil, some are good. Some protect humans, but some eat them. They protect specific villages -- or attack them.  At Setsubon (see previous post) the Oni invade towns, sometimes scattering goodies, and sometimes conspiring with parents to tell children they'd better behave, or the Oni will come back for them and GET them (whatever that means to the imagination of the child in question.)  This is usually seen as a fun festival, with local people dressing in the traditional Oni costumes, which are often quite intricate and beautiful, for their annual invasion! 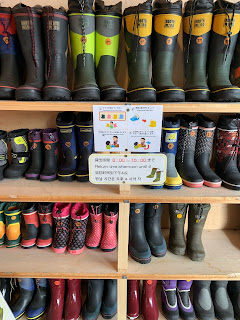 At the park office, there is this shelf of boots, for those who have come ill-prepared to walk to the viewpoints. When I was there, many tourists from warmer climes were in evidence. But don't worry!  There are these very good quality boots you can borrow!  Just change into them and leave your own shoes behind while you explore.  Change back when you're ready to leave.

I can't imagine another country being so thoughtful, or assuming such honesty on the part of their visitors.  These are NICE boots! Only in Japan!

Many of the trails were closed due to the season, but the roads were open.  This park, and Hokkaido in general, is surprisingly car friendly, but similarly deficit in public transportation.  As usual, there's too much to recount, especially since I managed to get on the wrong bus and was treated to a comprehensive tour of this largely industrial region.  I stayed in Noboribetsu proper, at a very pleasant onsen hotel with a view of the sea. If you get the right bus, it's quite close to Noboribetsu Onsen, where most of the tourist action is. The nice driver of the wrong bus managed to get me onto the right bus, which took me back where I started by a different route and then become the quick and direct bus to Noboribetsu Onsen and Hell Valley!

This was the view from my room, on a lovely day with calm seas, and the fishing boats were out. Later, the winds picked up and there was snow. I do love snow. 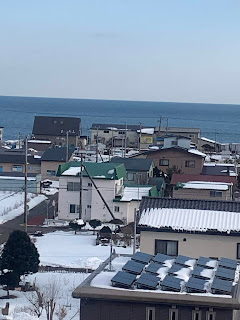 And there is so much more to come.


Posted by Claire Youmans Author at 4:18 PM No comments:

When I travel, there is always far too much to see and explore and I never have time to remember all of it, much less relate it, but today, in Nakajima Park in Sapporo, I came upon a treasure, when all I was looking for was something to drink.

I've been seeking snow all winter, to little effect because this has been a low-snow winter, highly unusual here in Japan.  I went skiing just before New Year's and had fun, but found the chairs too low and the snow too little. I needed more.

I also need to research Book 8, and that research took me to Hokkaido.

A wonderful thing about Sapporo is Nakajima Park, which is enormous and features many arts venues, plus a cross-country ski center and track.  How could I lose?

After skiing, I decided to pop into the Hokkaido Museum of Literature and get something to drink at the museum cafe and look around.  It was fascinating.  It would be more fascinating if I could actually read more, but the resources of the museum, including those connected with the University and its founding, plus all the many, many writers who have come from the area, are vast and wonderful.

The special exhibit, though, was a treasure. Bikky Sunazawa was a sculptor who worked in wood. He used wood in moving sculptures that show incredible life. There are drawings and models, and, for me, an especial treasure: his study and works inspired by the art of the Pacific NW natives of North America, so very congruent with the works of the Ainu people of Hokkaido, meeting in a happy fusion.

The Wind: Sunazawa Exhibit shows some of his wonderful works.  Right now, at the Museum of Literature, a companion exhibit showcases many of his writings and sketches, including some of his takes on Totem Poles.  Some of his poles were incorporated into the sets used by a dance company, and you can watch a video of the production.

Pictures, naturally, were not allowed, but this pleasurable hour showcases for me one of the wonderful things about my experiences in Japan. No matter where I turn, no matter how close or far I wander, no matter how lost I get, there is always something surprising and beautiful to treasure in a country that itself treasures art and beauty. 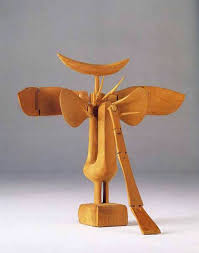 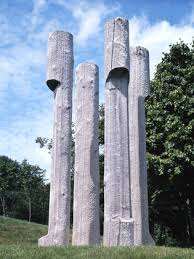 Posted by Claire Youmans Author at 3:37 AM No comments:

Not far from my house, on the Tamagawa, which translates as Treasure River, there is a large park that is centered on a number of 1500 year old Kofun (mound) tombs.  These are key-shaped, and look like very large hills.  Humans all over the world seem to like digging up their ancestors' graves, and the Japanese are no exception. The little museum shows the location of all the tombs in this area and showcases grave goods, has a diorama of a funeral procession, and even a mock grave.

On thinking about this human tendency, I can see why people go for cremation, though it's all very interesting. One of the most interesting facts one can glean is how some things never change. People then wore clothing quite close to the traditional samue and jimbei, trousers long or short, with wrapped long or short sleeved tops. They had jewelry, of course, and, interestingly, earrings, which went out of fashion until quite recently, especially for men.  Music accompanied funerals, with drums and other instruments recognizable to me as flutes and horns and stringed instruments not unlike lutes, which are still played.

Because the park climbs Kofun mounds, raised next to the river, there are many stairs and steep paths and, as is typical of Japan, the area is beautifully landscaped, with a huge hydrangea garden -- so many varieties -- and ume plums already in bloom! 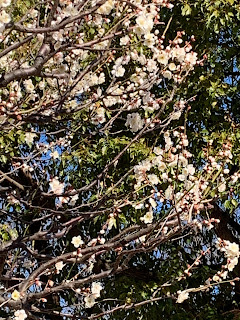 I'm not sure what this next one is, but it's about to favor us with blossoms. 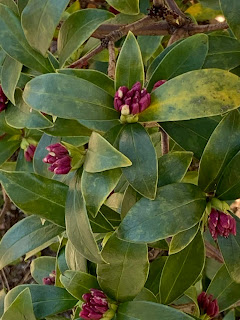 There are picnic sites and playgrounds and many viewpoints, showing the lovely river. It was called the Treasure River, at least in part, because upstream there are extensive flatlands suitable for rice cultivation, and rice, as the staple grain, has always been a treasure. 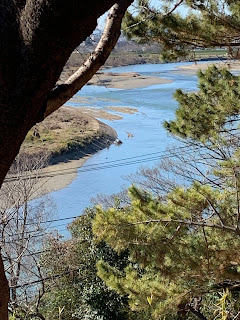 I found out that what I thought were leeks were actually naga-negi, a kind of giant scallion, but when cooked the way Chef Saito (Dining with the Chef, on NHK) recommended, only in my air fryer, turned out just as delicious as he promised. The other one became part of a luscious potato soup.  I don't have photographs of those, because I ate them!

Setsubon is tomorrow, and I am well-prepared with my little box filled with packets of roasted soybeans. I have learned that if you eat one bean for every year of your age plus one, you will have good fortune in the coming year!  Oni wa soto, fuku wa uchi!  (Demons out, fortune in!)

Posted by Claire Youmans Author at 6:10 PM No comments: