Whatever you celebrate, make it merry! Holiday wishes and Special Offers!


Together, Book 3 in the Toki-Girl and Sparrow-Boy series, is free until January 6 at:


ALL THE BOOKS are on sale for half-price from December 25 through January 1 at the New Year's Sale at Smashwords End of the Year Sale!

The books on display rotate, so just enter my name or the series name to get to these wonderful books! 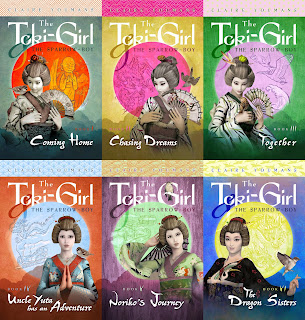 Posted by Claire Youmans Author at 7:10 PM No comments:

I've found, over the course of what's now nine-and a half books, that nobody understands how writers work. They think I can take "days off." That books somehow magically write themselves in the middle of the night. That I don't "really" work.

They are so, so wrong.

I just ALMOST finished the first draft of Book 7 in the Toki-girl and the Sparrow-Boy series. It is taking a little rest for a couple of days before I jump into it again tomorrow for the addition of an important bit of history that I somehow forgot and a general run through to take notes. Then I will go away for the New Year's holiday (a Very Big Deal in Japan) and return to do a real re-write, during a period when I actually CAN take a day or two off now and then to attend to some Real Life Adventures involving Serious Adulting.

But in a first draft,  I can't do that.  None of it.  I have a vague outline in my head, usually a first line and a last line and a general idea of how it gets there, but I also have a dozen characters, each with a separate story to tell against the backdrop of a nation and a time with its very own story to tell. I will have done research that often involves travel and museums. I will have stacks of notes and files in my computer and all of it will mean very little.

When I actually start to write, things change.  A first draft is the bones, the skeleton of the book. I have to keep the whole story in my head until I get it down. I'll pick something up and think it's a rib but it'll turn out to be a tibia.  Characters will insist on doing things I didn't know they wanted or needed to do. And if I am interrupted, if my brain must go do something else that involves other people and being a grown-up, I have to go back to the beginning and read it over to see what I have already down, and figure out what's sitting in my hand.

Every day I "take off" is two or three more spent on catching up.  I cannot tolerate interruptions and if you try to make me, I WILL bite. It hadn't helped that my computer broke TWICE and Apple is very much out of my favor right now.  And it always takes twice as long as I think it will.

Until I have that first draft sitting in my hands (or in my computer), I am chasing clouds and herding cats. Now I can breathe.

And, no, I am months away from done.  The book will come out in June, for the solstice, as is usual for this series, and I will have some breaks for research trips and other things programmed in. I even have a potentially exciting announcement.

So...there's another post coming with some holiday specials, and you be sure to have a great one.
Make merry!

Posted by Claire Youmans Author at 7:02 PM No comments: