Australia in the Japanese Alps 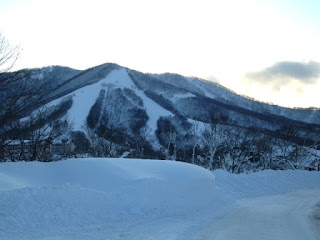 Madarao is a beautiful area.  Nestled in the Japanese Alps out of Iiyama, not far from Nagano, it's a small area with one large hotel, a couple of medium ones, countless guesthouses, first class terrain, manicured tree skiing, fantastic snow and half the population of Australia escaping their incredible summer heat to take refuge in some excellent northern hemisphere snow-sports.

The last part was a shock to me.

Japanese people love snow-sports.  They're not alone in this.  People from all over the world love to ski and board.  I expected people from everywhere to converge on what is some of the best skiing in the world in the height of the season.  I wasn't at all surprised to hear French, Italian and German as well as English in Tokyo station out of the mouths of people hauling ski and snowboard bags.

The Japanese Alps, right square in the middle of the country, are known for their beautiful conditions and fabulous snow.  Hokkaido, to the north, is legendary.  There are dozens of resorts strung up and down the country.  The conditions and snow are superb.  The season, especially up north,  is really long -- just what snow-sport freaks want!

I picked Madarao because I was looking for a smaller area close to Tokyo that wouldn't be thronged with beginners and lower intermediates, that would have some interesting terrain, where I could find a small, comfy ski-in - ski-out lodge, easy to get to and preferably with an onsen.  Madarao seemed ideal, and Kuma Lodge, while it didn't have its own onsen, was close to one and offered plenty of support in terms of pick-up and delivery and English speaking staff.  It also had a cancellation when I needed it.  You have to book early in Madarao.  The end of September isn't soon enough.

Australia's summer is hot.  It's running 40 degrees C, which is 104 F.  People want to get out.  Japan isn't far away.  If you like snow-sports, hopping on a plane for a week or two is a no-brainer.

Remember, I live in Japan now.  Even when I meet an English-speaking friend, I'm bouncing back and forth between Japanese and English and sometimes something else.  I will go entire weeks without speaking a word of English.  To land in a place where everybody was speaking English all the time with a pronounced Australian accent was a shock to my system.  No yukata kimonos (the Australians bring pajamas; I didn't).  Uh...towels?  A bathroom glass?  Avocado toast, jam, Nutella, eggs, cereals, juice, milk and ham for breakfast (what?  No miso soup?  No salad?  Where's the rice?)  I felt displaced.

The skiing was great.  The snow was phenomenal.  The terrain was steeper than I thought at first but seemed easier than it should because of that lovely, perfect, fluffy snow.  Since this is Japan, the tree-skiing areas, which I'd normally be cautious of, were manicured to the kind of perfection only a Japanese gardener could achieve.

My boots were screwed up and the lifts are so low they're hard for me to get out of if I can't bend my knees, which I couldn't with screwed up boots, so that was...strange.  However, I figured it out and the boots are now fixed and the skiing part was incredible.

Dinner was, shall we say, amusing.  The restaurants were either owned by Australians or the food was geared for Australian tastes.  This means they do at least understand vegetarians don't eat fish and that diners like to tinker with menu offerings.  They don't know how to make a Margarita, even when it's on the drinks menu.  The pizza was...odd.  I found some nasu dengaku (roasted eggplant in a miso sauce) that was beautifully done.  Pickled carrots so good I made some when I got home.  The variety of beer was staggering.  The consumption of beer was likewise staggering.  I found some French-Japanese style vegetables that weren't punitive in that they were properly cooked and actually seasoned.  Nobody seemed to have heard of protein as a component of a vegetarian meal.

One of the nice things Kuma Lodge does is make dinner reservations for its guests.  It booked me into an okonomiyaki place called Sakura that was a little hard to find in the dark, in the snow.  There was a man outside clearing the walk.  He was Japanese, so I spoke in Japanese.   I was in the right place, he showed me in and introduced me to the chef, his wife.  I was early; it was empty.  We chatted in Japanese and she brought me into the kitchen where she has a big teppanyaki grill where she works her magic, sat me at the bar, and proceeded to teach me how to make okonomiyaki, from the batter to the correct brand of sauce.

Suddenly, I was back in Japan, and I liked it. 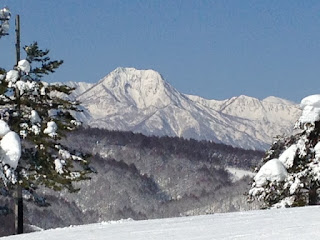 Posted by Claire Youmans Author at 1:57 AM No comments: