I'm back in Tokyo after a research trip to Hokkaido for Renko's Challenge, which will be Book 6 in The Toki-Girl and the Sparrow-Boy series.  Here are some highlights.  There is more to come.

Hokkaido is recovering quickly.  While many people cancelled their plans, I only had to cancel one leg of my planned trip because I couldn't get there by train due to tracks still under repair from earthquake damage, and bus involving backtracking and very long rides that would have left me no time to go in search of Sea Eagles.  It's early for them at that location, so it's all good.  I have an excellent excuse to go back.

Hakodate and Sapporo were developing madly with the sought-after aid of the USA during the late 1800s.  Seattle and western Washington, where I hail from, were doing the same thing, but not because  Russia wanted to annex large territories the US wished to hold on to. Seattle's phenomenal growth was largely attributable to the Alaska Purchase of 1867 and the Klondike Gold Rush of 1896.

Russia still wants to get undisputed title to many islands that string off the north coast of Hokkaido, locally known as the Kurils, and Japan is still resisting. I know I was looking at the Japanese side of history, but Tokugawa Ieyasu first formally made Hokkaido part of Japan in 1604 by establishing a definite national presence there.  There was trade with and through Siberia, much of it with China (quite legally; Chinese trade was not proscribed), and also through the Aleutian Islands with North America.  Russia didn't seriously show up until 1859, when it established a consulate and a church the instant Hakodate was opened as a free port.  Japan played a very long game and a very clever one here.  Unless Russia can show some more evidence, Japan's the clear winner in this ongoing dispute.

But!  The BOAT!  With only occasional cancellations for storms, the MOL ferry line runs two boats a day from Oarai, a port north of Tokyo, to Tomakomai, a port east of Sapporo.  You get a package, if you want, that includes transport to and from Tokyo station and to and from Sapporo, or several other towns via Sapporo, plus your ferry fare. The basic fare includes Festival Sleeping, a Japanese style dorm, for men or women, or you can get a cabin. Many of the cabins have balconies and views.  They are expensive, with a single surcharge.  The passage is overnight, and while you can bring a vehicle or a commercial truck, you can't stay in your vehicle, so you must have provision for a passenger.  You can also bring your pets, if you have a cabin.  There are buggies to transport your pets from your cabin to the designated pet playrooms and dog runs. This is hilarious, but Japanese dogs tolerate this quite well.  They are used to having chauffeurs.  I was on the Sunflower.

Cabins are pretty expensive if you're traveling alone, but there is something called "comfort class" which is essentially a capsule cabin.  You have a curtained berth, rather like a very large quarter berth, with a plug, a light, a couple of small shelves, hangers, headphones, slippers and your very own TV.  I did this and liked it very much.  There are 20 of these in a larger cabin, and I think 6 of these cabins.  I only saw women in mine.  I had lowers both times.  People are quiet and polite.  If you want to watch TV -- I didn't -- you use your earphones.  There is a Grand Bath with a View, one for women and one for men, and it's a delight to see the spa water rocking with the ship as you watch the sea slip by.  This coastal route is popular and you see other ships passing as well as fishing boats when you're close to shore.  Lighthouse spotting is fun.  People who take this mode of transport are people who like the sea, even if they are driving commercial trucks.

While you can bring food, or buy little things from the shop, most people get meals at the restaurant buffet.  It's not really cheap, but it's very good and there are plenty of choices.  You can get dinner and breakfast for 2400 if you buy both, and there is a light lunch (curry) served at noon, fairly close to landing, for 500 extra.  Wine and beer are available and vending machines abound, selling booze as well as coffee, tea and soft drinks. There's a game room and a kids' room, which came complete with a balloon artist! There isn't enough on-deck walking, but there are enclosed view seating areas which are pleasant.

Of course I liked it!  Of course I'll do it again!  I did get a couple of souvenirs.  The baths are bring your own towels, but if you forget, they sell hand towels in the shop so I expanded my collection.  I also got slippers, even though I had theirs, just because I can use them at home.  Individual servings of sake are often sold in what I would call juice glasses, so I had to have one of those, too.  I also got one on Mt. Asashidake, and I have another from the Nakasendo, so my glass collection is progressing nicely.

What may be the absolute best thing is that the weather was cool and wonderful!  It was chilly, foggy and a little rainy when I went to Mt Asahidake, and there may have been a touch of snow in the rain, though I couldn't tell for sure, but that was the only day that even approached iffy weather.  So I have another reason to go back.  And bring my skis.  You can ski absolutely everywhere in season, and the season runs about five months.

I'm back in Tokyo as of last night, running through a long list of accumulated tasks I could not get done while I was gone, and it's been raining all day.  It's going to rain most of the next two weeks, too.  I think my fortune has been very good indeed! 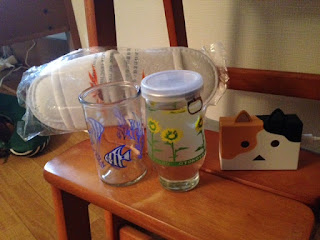 I forgot the thing on the right.  It is "mobile battery" for my cell phone, which all too often runs out of juice.  Yes, it does look like a calico cat.  It was selected for me by the attendant at the shop, after I had figured out how to ask for what I wanted, where to get it -- and finally learned that it has a formal name in Japanese.  "Mobile battery" is what you call it, said with a Japanese accent!

Posted by Claire Youmans Author at 3:01 AM No comments:

Every single day, somewhere in the world, some country, some county, some city, some town gets slammed.

Japan has had two big ones in quick succession. Typhoon Jebi hit strong and hard on Tuesday.  KIX, the Kansai International Airport, was flooded (it's on a low-lying island just outside of Osaka) and closed. A fuel tanker pulled its anchor. The crew was unable to start the engine, and it crashed into the bridge between KIX and the mainland, closing the bridge and damaging the ship. The crew, fortunately, was not injured. Winds were strong enough to tip over trucks and rip them apart.  At least six people died as a result of this storm.

In the wee hours of Thursday morning, a 6.7 earthquake (on Japan's scale, so this is really big) hit the northern island of Hokkaido, taking out power to the entire island, causing destructive and dangerous landslides, wrecking buildings and, as of this writing, killing two people, with 140 reported injured and about 40 sill missing. Four thousand of Japan's Self-Defense forces are on the scene, working with locals in search and rescue, with another twenty to twenty-one thousand on the way. A national task force was called together and mobilized rapidly. The island's major New Chitose airport is closed, Shinkansen service is suspended and local train and bus service is mostly cancelled for now, though people were able to leave the airport by taxi and, by now, likely by bus. Many roads are too damaged for use. Water supplies are cut off in vast areas. Hospitals are running on backup power, unable to provide normal services.  Updated to add:  As of this evening, it's 7 dead, 300 injured and 30 or so missing.  The intensity has been upgraded to 7, the highest level on Japan's seismic scale.  They're working hard at Search and Rescue, helping evacuees, and getting some infrastructure up and running, but it's going to take a week or better to get power restored to the whole island. You can keep up with both stories at https://www3.nhk.or.jp/nhkworld/en/news.

Things are moving rapidly. About 3000 people spent the night at KIX, without power, without A/C and with limited food supplies, but were ferried off starting early this morning, to the Kobe airport, where transportation is available. The damaged bridge has been inspected and deemed safe enough for buses to carry the remaining stranded flyers away from the airport island. I haven't seen new film of the ship, but by now, midday Thursday, I suspect it has been pulled away from the bridge to a repair facility. KIX will reopen Friday after it's determined the runways are safe for airplanes, and the airplanes on site are deemed safe to fly, beginning with domestic service with international service to follow.

On Hokkaido, people are being asked to stay calm, evacuate if they are in an area in danger of slides,
of buildings collapsing, or damage from aftershocks, which may persist for a week, and may be nearly as large as the initial quake.  People are opening shelters and gathering food and water for badly affected areas. People are going to their jobs at power plants, on road crews, at hospitals.  Schools are closed, but many are being opened as shelters for the displaced or evacuated, often, it seems, by school workers who came in for that purpose.

People are being asked to be careful and be sensible, to help each other.  And they are.

This is Japan.  People care, and the government cares, on the local, prefectural and national levels.  Preparation is extensive. There are plans ready to execute at need, and they are now quickly implemented.  Individuals see what needs doing and do it. People from here in the Kanto area and elsewhere will give up their weekends to go north and south as volunteers to help wherever there's need. In prior disasters, I've actually seen announcements thanking people for their efforts, but letting them know no more on-site volunteers are needed, however, those who want to help can contact agencies closer to their homes to learn exactly what kind of help they can give.

These are serious circumstances. The amount of damage is enormous.  It's on two separate ends of this long, narrow country.  But everybody's going to pitch in and get things fixed, because they're all in it together, and they know it.

I'm an American.  Right now, I see more divisiveness than I have ever seen in my country, a country that even has "United" in its name. I see people bickering about money while Puerto Rico is still mostly without power, though locals are doing their unsupported best, while Flint still doesn't have clean water to drink, and there's almost nothing locals can do about that.

As I watch Japan's response to two near-simultaneous disasters, I think we Americans can take a lesson from this.  We are all in it together, and we ought to start acting like it. 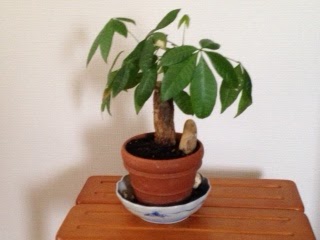 Posted by Claire Youmans Author at 9:53 PM No comments: