The Toki-Girl and the Sparrow-Boy have joined with other fantasy creatures in a Group Giveaway at Instafreebie.  This is for book 1, Coming Home.

Big changes coming for the TGSB series as Book 5, Noriko's Journey, moves to publication this summer.  As Azuki and Shota grow up, the series grows up, too, and Japan moves incredibly quickly to take its place on the world stage.  Advances in technology, education and diplomacy happening every day (and twice on Sunday!)

This giveaway runs through June.  Stock up on summer reading today! 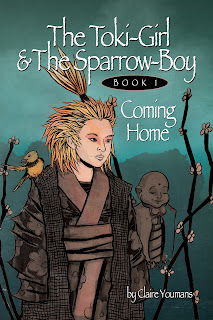 Posted by Claire Youmans Author at 6:32 PM No comments:

Meiji Shrine is huge.  Built around a garden Emperor Meiji built for Empress Shoken, its vast forest is composed of individually planted trees from all over the country donated after their deaths when the Shrine was built to honor their souls, which are enshrined there.  Their bodies are buried somewhere else, in or near Kyoto.  There are two museums, the Museum, containing artifacts from the Emperor's life, such as his desk, carriages, uniforms and so on, a series of Imperial portraits, and many photographs.  The Annex, near Harajuku station, is much more accessible, and features a changing exhibit of collections, including clothing, accessories, personal items like desk sets, and often features photographs from what must be a staggeringly enormous collection.  I visit the Museum every few years -- that's a permanent collection  that doesn't change.  The Annex, however, I visit regularly and it's given me much information and many ideas for the Toki-Girl and the Sparrow-Boy series.
Saturday, I was supposed to attend a hanami party to celebrate the close of the sakura season.  The group didn't send out location information, there were no signs, and the security guards and direction-givers stationed all around the park had no clue.
In Book 6, there will be a Shinto wedding -- a big one.  Saturday is a big day for weddings at the Shrine proper, so I went there instead.
First, one enters the outer shrine precincts through a gigantic Tori gate.  There are several of these.  One enters the inner precincts through a second gate.  The Shrine itself is inside a courtyard and includes several halls usually reserved for ceremonies and closed to the public.  There are any number of ancillary buildings where one arranges for various services and where various services are held, including the presentation and blessing of babies!  So many babies! Everyone was so happy, including the troop of security guards, whose main focus was clearing paths for people participating in ceremonies.
Wedding parties enter the courtyard and proceed to one of the inner halls where the wedding ceremony itself will be held.  These are private.  After the ceremony, the wedding party leaves the courtyard and processes to one of the photography areas.  One may watch, but the area is closed off to tourists.  After the photographs, the wedding party leaves and the bride goes into a screened off area where her first headdress is removed and her hair, make-up and clothes are refreshed while the groom waits, taking pictures on his phone and making jokes with the various attendants and experts.  When that's finished, there may or may not be photographs of the couple together, and then they go off to the reception.  One couple was kind enough to pose with a group of Chinese tourists on their way so the tourists could take pictures with them.
Pictures?  Yes, I took some.


Posted by Claire Youmans Author at 6:53 PM No comments: