Joseon is pronounced Cho-son and other adventures

Yesterday, I made a very long day of a visit to Seoul.  I took the KTX bullet train, which is pleasant and fast.  It's also remarkably cheap.  It's an hour to Seoul station and the cost translates to about $25 -- about half of what a similar trip in Japan would cost.  Rather than switch the seats depending on which way the train is running so that they all face front, half the seats face front and half face rear, with one set in the middle with a table in between.  All seats are reserved, and there is a handy button for "English" (for that read Romaji, or the western alphabet) so that one can actually use the vending machines with no difficulty.  Electronic reader boards switch between Hangol and Romaji, so there's no difficulty about determining what track to head for, and any delays -- which were always a matter of a very few minutes -- are clearly shown.  They also announce in Korean and English.  The train is nice, clean and very fast.  One can check luggage.  The seat pitch is a little tighter than in Japan, but that's offset by being able to check bags.
In Pusan/Busan -- the pronunciation is halfway in between -- the subways announce in four languages -- Korean, Japanese, Chinese and English -- so I had a 50% chance of actually understanding the announcements.  In Daejeon (Tay-jon), the subways do announce in English and Korean, but the volume is very soft.  They have helpful TV screens that announce in print, if you can see them, and in the middle of each car, a lighted map shows where you are and the direction of travel.  Romaji is everywhere in the train and subway systems, including the vending machines.
In Daejeon, you get a token that you use to get through the turnstiles.  In Seoul, you get a card, on which you pay a deposit.  You can get the deposit back by returning the card to a machine just outside the exit, and the turnstile (electronic gate, really) reminds you to do so.
The train and subway systems are remarkably easy to navigate, once you have figured out where you are going.
However, Korean is pronounced nothing like the way it is spelled, as I discovered my first trip.  I haven't been here enough to know the rules, but they seem to have no logic comprehensible to me.  I've heard that the romanization of Asian languages is often set up to make absolute phonetic sense to a native speaker of the language.  If you're not, ask people to please write the name phonetically for you, or say it several times so you can.  Seoul, for example is Shi-ol.
People talk and use their phones on the subways and trains, and cluster in groups walking and using their phones.  This is a problem because they walk slowly when using their phones.  I haven't got my big-city legs back totally yet, but I am much faster than someone staring at her or his phone.  In Korea, the manners are more American than anything, and one dodges, shoves and wouldn't dream of letting people get off the subway before charging on.  Queues are a mystery, even where the painted lines indicate people should line up.
Did I mention the stairs?  Near as I can tell, Koreans LOVE stairs.  They are everywhere!  Lots of them!  In many stations, there are escalators and elevators in some places, and sometimes there are even signs pointing to them, but there are entire stations where finding the "Way Out" you want means three or even four flights of stairs with no other options.  Signs end once you've achieved street level, in my experience, so that can be a problem, unless what you want is obvious or there is an information booth nearby.
Tuesday, I went to an area known for hot springs, which boasts a (crammed) free public foot bath and an entire hot spring theme street.  Maps aren't oriented by direction in Asia, so the top isn't always north.  The tourist information booth had the map of the street on two separate sheets, which could be put next to each other for a complete map.  Unevenly.  However, the nice lady wrote upside down on one, and that made navigation problematic, as did the fact that there is no common symbol used here to indicate "hot spring."  However, even with no Korean -- Japanese isn't useful here like it was in Busan/Pusan, except at the hotel, and there isn't much English at all -- once I found a spa, I enjoyed it thoroughly.  It isn't nearly as formal as a Japanese one.  Everybody talks constantly.  Sometimes buttons work; sometimes they don't.  There was a children's pool, temperatures were clearly marked, and nobody cared one bit that two little girls -- having a ball -- were running on the wet floors as they carried toys from pool to pool.  That was great fun!
Seoul is full of palaces, museums and sights to see.  Many are clustered around the National Palace Museum, which makes life easier.  Except for the stairs.  These are center around the Joseon era, which ended in the early 20th century when the King of Joseon decided he would become the Emperor of Korea. 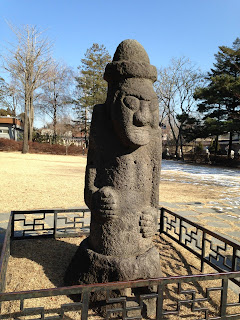 Public art in Korea is nothing new.  Angry Grandfather here is from Jeju Island, off the southwest corner of Korea.  The tradition there is to place an Angry Grandfather statue at the entrance to a village to frighten away evil spirits and other marauders.  There are plenty more pictures on my FB timeline.  I once again am having trouble importing photos to where I want them.  He says some interesting things about Korean grandfathers, doesn't he?

Posted by Claire Youmans Author at 6:47 PM No comments:

On the road again: Daejeon

There's a little glitch in visa-land.  I had to leave Japan quickly, for a (I hope) very short while.  The last bit of paper I need SHOULD arrive shortly (via overnight express from my lawyer in Japan).  Then I SHOULD be able to go to the Embassy/Consulate in Seoul and get the actual visa within a few days.

I am in Daejeon, Korea.  It's quick, it's cheap and I was able to get in. Remember when you used to be able to obtain show-up-and-get-it 90 day tourist visas most anywhere?  Since the US doesn't do that any more (you have to fill out forms months in advance and be pre-cleared now) other countries are doing likewise.  Finding someplace that would simply take me was no longer a "where would I like to go?" sort of thing.  Those who have suggestions about where I should go or stay should please recall they needed to make those suggestions three months ago -- before I even knew I had to go!

Of course, this whole trip is complicated by the winter Olympics, and Seoul is packed.   Daejeon is the D.C. of ROK, and on their KTX (bullet train) line.  It's a place in its own right with stuff to do, and if you take the train, it's 45 minutes to downtown Seoul. NOT expensive, either. In fact, Korea is mostly remarkably cheap, except for the big Western chain hotels, which are insanely expensive.  There is, however, another side to that story.

Remember the Knight Bus from Harry Potter? THAT is what I rode from the airport to get here, after being assured by the nice Information people (and Koreans are very nice and helpful) that was the best way! Cheapest, for sure, at about $15, for nearly 3 hours of jerking, squealing, swaying, rickety-rackety adventure, with a 10 minute break at a truck stop that boasted a Dunkin' Donuts and, it very nearly seemed, no restrooms.

I am staying at a comfortable and convenient Toyoko Inn (where they speak Japanese, highly useful since I speak no Korean and few speak English beyond a few words).  Aside from the wildly expensive Western and Western-style chain hotels, there are gazillions of hostels, guest houses and mini-tels all over the place. I tried one in Pusan last November.  Not very nice, though clean. Endless flights of stairs. Broken, inadequate furniture. Most display the "Onsen" sign to get out of having private baths.  This one looked great on a major travel site, though, and they are a "chain" that uses the internet well.  Neither the neighborhood nor the stairs worked for me at all.  I was able to move to a Toyoko Inn by Pusan station for only a little more ($10 a day or so, for a total of about $45), rather than a big Western or Western-style chain for 10X+ the price -- $450 - $500+ per night -- and liked it. I am paid up here for a week. There is no way I could work in a hostel, and I do need to work.  Books?  Deadlines?  Publishing?  You know, what I DO.

This visa thing is so frustrating. I am way behind. I have even negotiated the cleaning here so I don't have to be out all day, which is usual in hotels in Asia. So perhaps my time here won't be a total waste. Most of the sights are beautiful views (it is pretty here) with not much to do. I have a good book with museum listings. A few have exhibits (not just documents) and sound interesting. I will get to those. There are a few Moroccan journalists here for the Olympics, also due to the dearth of rooms and inability to share bunk beds in a dorm like backpacking college students (those are full, too, however.)

We bonded over attempting to get vegetarian food. I had forgotten I can use my phone to translate. They had not!  Hurray!

No cream or milk for coffee (but a huge fancy machine), no salt, no tofu, white sandwich bread for toast, undercooked black beans, black bean and sesame seed rice, also slightly undercooked, and NO FREAKING TEA of any description. You get a couple of bags in your room each day, though. I didn't care much for Korean tea, so I brought my own, but not enough to share, so they are out of luck. The broccoli and carrots were good, and the green salad was fresh and fine. There was a leek and potato soup the journalists determined was vegetarian, and it was excellent. And SALTY -- so they actually DO have salt in this country! Just got a text from the cell phone carrier. They offer a somewhat limited translation service (weekdays during business hours) in many languages, including English, Japanese and Korean. So there may be actual food here after all. 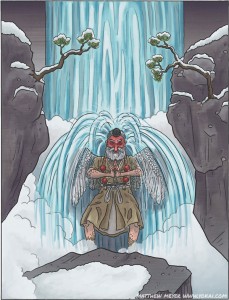 Posted by Claire Youmans Author at 6:12 PM No comments: