A pretty city, a lovely temple, a great "subway." And STAIRS.

Busan is a pretty city, arranged on the lower slopes of wooded hills/mountains around an extensive harbor.  I arrived, took a cab to the guesthouse, and was promptly lost.  There were no signs and there was a network of alleys.  A nice local man guided me to the proper place, over there, two turns into an alley, among dozens of its fellows.  Busan is full of motels, mini-tels, guesthouses, hostels and other small places one can stay in greater or lesser comfort, in every single neighborhood.  My pre-trip research discovered only those and wildly expensive Raddisons, Hiltons and Westins.

That's when I discovered the Korean love of STAIRS.  Endless stairs.  Everywhere.  Settled in and hungry, I set out to see two things on the reputedly superior Humetro "subway" (often it's a El).  The first was Beomoesa, pronounced Po-Mo-Sa, a Buddhist temple dating to the 600s, and a vegetarian restaurant supposedly located just outside it.  It has its own stop on the number 1 (red) line, so that seemed easy enough.  After leaving the train station, I had read it was possible, just, to hike up to the actual temple, but it was better to take the bus.  It took me a while to find the stop, which is hidden from the station, and there are no signs.  This is another thing about Busan.  There are no SIGNS in any language all too often, or they lead to dead ends or someplace else instead.  If one has the written Hangul, one can match the pictures easily enough, but not if there is nothing to compare with what you have.

And I'd been so impressed by the Humetro!  Modern, clean, easy -- except for the stairs, but there were occasional elevators.  Korean, English and often Japanese on the signs, and the train announced itself in those three languages plus Chinese.  The people were kind and friendly -- this is how I learned how Beomeosa is properly pronounced.  The Romanizations aren't pronounced anything like the way they're written, so it's necessary to learn each separately.

The temple is gorgeous, and seems to require and undergo continual renovation and repair, as would I if I were that old.  There was work going on everywhere.  The style isn't Indian, it isn't Chinese and it isn't Japanese.  It is uniquely Korean, full of color and life, lots of flowers painted in patterns that are almost middle-eastern in complexity.  The statues look Indian to me.  Since it's not my kind of Buddhism -- it was hard to determine exactly what kind it is, as there appeared to be several versions going on -- I admired the art and the history.  This temple offers temple-stays, so one can stay there and learn about their meditative practice, and eat their vegetarian food!  I drooled at the thought.  A few monks were around, but mostly it was nuns who were running the show, in each of the various buildings, providing security and leading meditation sessions and things like that.  They wear grey trousers, some kind of long-sleeved blouse, T-shirt or sweater (that's not uniform) and a grey vest, with the jackets of their choice.  They do not shave their heads, but their hair tended to the short and simple, often with curls.  Both men and women seemed to wear a kind of plastic skimmer flat with a pinched and slightly upturned toe.

After climbing all the stairs and reading all the signs and enjoying all the art,  I tried to find the vegetarian restaurant, which is not connected to the temple.  It also, as far as I could tell, does not exist.  Starving and hurting from all the stairs, I caught a cab back to the station.  A nun flagged the cab and I nodded when the driver indicated he'd like to pick her up.  She only spoke Korean, as did he, so my attempts to find out more were foiled.  She contributed her share to the fare so all was well.

The first of two monks I saw is pictured not exactly below, but there's a link, beating a huge drum.  They incorporate a lot of music into their practice, with gourd-type instruments, singing and then this DRUM!

Well, I've been trying for days now, and cannot get the pictures to send through e-mail but I have got many of them to the Toki-Girl and Sparrow-Boy's Facebook page.  Here's the link, so head on over there, and please do like the page.

Now FB won't let me put the photos on the TGSB page, but check it out and like it anyway.
The Toki-Girl and the Sparrow-Boy on FB. Please like.

I HAVE managed to get bunches of the photos on my personal FB page.  That's here.
My personal FB Page, where the photos are.  You can like that, too, if you want, but the TGSB page is where I put most of the interesting stuff.
Posted by Claire Youmans Author at 6:02 PM No comments:

On the way to Busan -- PICTURES! 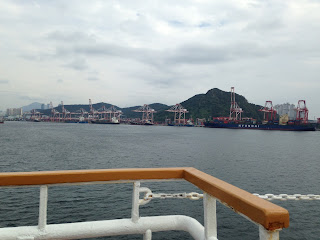 They're backwards, of course!  Entering the beautiful harbor at Busan/ 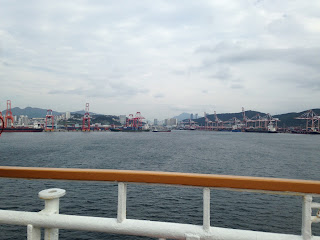 Another angle.  Busan is a lovely city with several harbors connected by bridges. 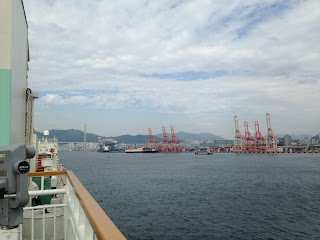 This view is of the city center, aiming right for the International Ferry Terminal.  It's a flowing, arching modern building, quite lovely as is almost all the modern architecture in Busan. 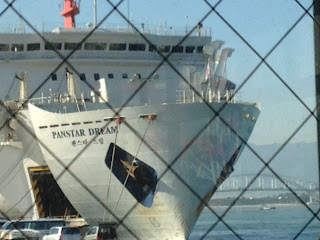 This is the overnight ferry that took me there.  It sails to and from Osaka, three times a week, and carries cargo as well as people.  It's like a Canadian ferry, and you can bring a car if you like.  Since Busan drives on the right and Japan on the left, you might not want too. 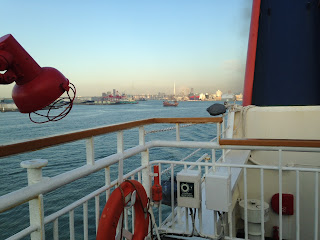 We're leaving Osaka, a pretty city in its own right.  We exit the inner harbor and go right by KIX, built on its very own created island. 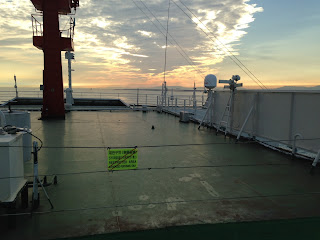 And we head off into the sunset. 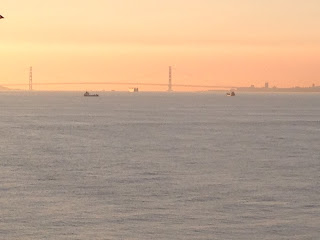 We're approaching the bridge that connects Honshu with Shikoku as we navigate the Inland Sea. 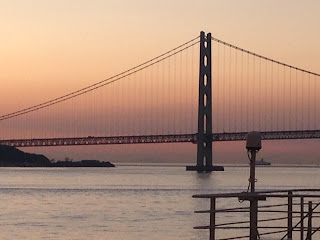 Here's a closer look.  With the two-person staterooms, you get a random roommate.  Mine was a friendly Korean woman married to a Japanese man, so we were able to speak Japanese.  These smaller cabins don't have their own heads -- it's down the hall -- and the bath is an ofuro, which is referred to as a sauna.  It has one of those, too.  There's a hot soaking tub, and a cool one, too.  Bring your own towels.  I now own two, at 200 yen each, from the on-board shop.  They are the hand-towel sized ones like they give you at Japanese inns for souvenirs.

There is a tricky passage -- well, several, actually, but on the outbound leg we went through one at about 9 PM.  This is a heavily trafficked and well marked area with lots of tiny harbors with their own marked entries.  It's necessary to count the flashes to see which marks to follow.  Often, there are also mid-channel buoys.  Things are further complicated by the area's extensive fishing industry.

Posted by Claire Youmans Author at 6:45 PM No comments: