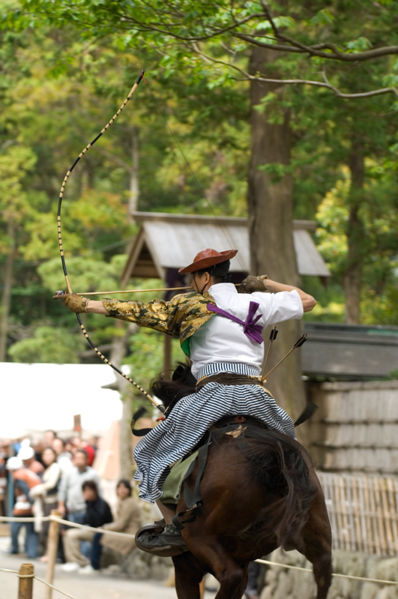 Yabusame is a kind of mounted archery done on various occasions, from Shinto Shrine festivals to (apparently) opening racetracks for the season.  The riding is gorgeous, the archery impressive.  It dates combat archery, formalized about 600 CE.  Azuki likes it, but Blackie won't let her fall!

I went to see it at the Samukawa Shrine, where it's an annual event.  Silly me:  I thought this event was probably people from the local barn having fun with their horses!  It's so much more than that.

Here's the link that gives ALL the information.  And, yes, those are the horses and people we saw ride.  Take a look at the videos!  It's a HUGE WOW of a good time.

Yes, there are historic costumes and some Shinto rituals -- and also food stalls, games, music and entertainment.  If you ever get a chance to see this, it's worth it.  I'm going to go again!

The history of Yabusame with VIDEOS!


Posted by Claire Youmans Author at 8:02 PM No comments:

Don't forget to enter the Giveaway:  just click this  link and off you go!
Amazon Giveaway

My usual experience is that Japanese weather forecasting is good, excellent, even.  Japan likes to know what's going to happen, so that stores can roll out displays of raincoats or snow boots, and umbrellas can pop up for purchase everywhere, like mushrooms, only to be abandoned in outdoor storage racks after the storm has passed.

So we knew, far in advance, that a typhoon was coming.  A friend was traveling last Friday and while her plane was going, it was possible her dive trip might not.  She was going far south, between Kagoshima and Okinawa, to a not terribly remote island by Japanese standards.  And she went.

I found the day cloudy and oppressive, but quiet.  Yet the night brought some wind and long ocean swells.  Surfers loved it!  It was the first sign that indeed a typhoon was on its way.

Saturday was a little windy.  The swells continued.  The surfers had fun.  It started to rain while I walked along the beach, something which has become a habit of mine.  It started to rain about two, spitting off and on, while the surf continued to build, also there still wasn't much wind.  "Tomorrow," people said, predicting increasing wind.

By Sunday morning, I ran out of books and was also out of Intenet, so I had to dig out my duck shoes and walk 1.7 km to the station, where I could download some more at the ubiquitous Starbuck's.  The rain continued.  A little wind picked up and turned my umbrella inside out.

By evening, the rain stopped for a while and my umbrella righted itself in the increasing blow.  I loved it!  Crashing surf!  Crashing surfers!  It felt like the Oregon coast.  I felt right at home.

It rained all Sunday night, with lighting and thunder as the Dragon King reveled.  By Monday morning, it had stopped.  The clouds were gone, but the wind continued.  The sidewalk was an inch deep in the wind's gleanings from the cedar trees above.

Mt. Fuji overlooked a roiling sea, with waves breaking far offshore, and foam blowing streaks.  The heavy wind, now offshore, opposed the sea and surf, perhaps 4 meters high (which is pretty darned high) broke close in sequence several times as it approached the shore.  Sandpipers raced the waves, coming close to the long lenses of intrepid photographers.  I walked a long way past the fishing harbor and beach to reach a rock jetty, where holiday booths served alcohol (people seem to drink a lot here) and snacks, and kids from preschoolers to teens demonstrated their skills on skateboard ramps to live music.  Bicyclists raced down the paved path.  Sunbathers stretched out on damp sand, and the wind carved new edges in the sandy cliffs.

Spray crashed over the tops of the jetties, and only the best and bravest surfers dared the waves.  Looking towards Mt. Fuji, the foam waves obscuring its base, the foam blew seaward off the tops of the waves and shined platinum in the light.

The wind had dropped by evening, a pleasant 12 to 15K, but the long swells continued, bringing out the less expert as I tried to figure out their plans.  They seemed unable to paddle quickly enough to catch the steep waves, and when they did, worked hard to get out to the surf line once more.

At last the remnants of clouds turned pink as the sun set behind the mountain.  The surfers draggled in.  Photographers packed up.  Joyously running dogs and children were corralled and the local loudspeakers -- everywhere in Japan -- announced the closure of parking areas as everyone headed home.

A neighbor had blown the sidewalk clean.

The typhoon was over.


Posted by Claire Youmans Author at 7:00 PM No comments:

Life on the Floor: Playing Charades

It's September, and, as predicted, the national thermostat dropped by ten degrees.  Instead of the 90s, highs are now in the 80s.  In another week, they'll drop to the 70s, and life will be comfortable again.

It's been my experience that if Charades were an Olympic event, Japan would go Gold every single time.  Sure, saying an English word with a Japanese accent often works, but to develop the accent means studying Hiragana and Katakana so you know how an English word would be written in Japanese, plus listening to native speakers so you understand how they pronounce things.  Even after much study, I still need people to pronounce words for me so I can say them correctly.  This particularly applies to place names.  Also, the English word used in Japan might not be the one you're expecting.

But if you're coming on vacation, or coming to study or work and must get settled before you start, Charades are the way to go.  Your hosts are experts!  They will win, and so will you.

Recently, I bought a tea kettle, a proper stainless steel one that whistles!  I love it.  It has a nice black handle on top.  Unfortunately this isn't heat proof, so I needed to buy a potholder.

When I got to the store, Ito Yokado, which is something like a Japanese Target, I couldn't find them.  I realized I had no clue how to ask where they might be.  Sure, I can ask where something is, but what if I don't know the name of the something?

I resorted to Charades.  I pictured a pot and said (in Japanese), "The pot is very hot!"  I stretched out my hand, mimed touching it and said, "HOT!"  I then mimed putting something on my hand and reaching out again, and smiled.  I held out my hand again and said, "Where would I find these?"

The woman smiled.  She knew exactly what I was talking about and led me to the well-concealed display of pot holders and oven mitts.  I asked, "What are these called in Japanese?"

Her smiled broadened.  "Mee-ten" she told me.  So now I know, and so you do, that I ask for a "mitten" pronounced with a Japanese accent when I am looking for a potholder!

Try Charades!  It works.
Posted by Claire Youmans Author at 5:37 PM No comments:

Life on the Floor: 4 Laundry Day

Very few people in Japan actually own or, if they own, use electric or gas clothes dryers.  People talk about the cost of energy to operate them, and everybody dries things outside.
Houses and apartments have holders on balconies or near side or back doors into which one sticks long poles so they hand horizontally.  From the poles, one hangs clothing on hangers, or on special oval or square racks from which depend clothespins of various sizes to which one attaches small things like underwear, small towels and socks.
Today, the forecast was for cloudy weather and fairly cool temperatures.  Weather forecasts in Japan are usually very accurate, so I'm not the only person who started a load of laundry early.  I also wanted to run a few errands today, while it was cool, because it's going to get hot later in the week.  I thought I'd get the laundry hung, run my errands, and be able get the dry laundry in before dark.
More fool me.  As soon as the washer beeped in completion, it started to sprinkle.  I checked and a revised forecast showed showers on and off all day long.
I hung the damp laundry on hangers and drying racks, and hung those on the curtain rods before the windows.  My idea was that things would start to dry and I'd put them outside when I got back from errand running.
I was also not alone in this.  As I walked up to the station, where all the big stores are, I saw that many people, similarly fooled, had done exactly the same thing, so curtain rods up and down the streets were festooned with drying clothes.
It's now early evening and getting dark.  The clothes still aren't dry.  A couple of hours ago, I went to move everything outside to finish drying before dark.  As soon as I opened the balcony door, it started to rain.
It's still raining.
Tomorrow, predicted to be only partly cloudy, will see mostly dry clothes all over town moving from curtain rods to outside rods where they can finish drying in the sun.  If we're lucky.
I think I want a dryer.

Posted by Claire Youmans Author at 1:25 AM No comments: