A wonderful feeling/call for reviewers

It's not right yet, but it is now possible to get The Toki-Girl and the Sparrow-Boy Book 4, Uncle Yuta has an Adventure at Amazon.

As you've no doubt noted, getting this book out has been very difficult, and it's not quite done yet.  It'll take a while to appear in Nook, Kobo and iBooks, but it will.  My views on why this continues to be so difficult have previously appeared, and I haven't changed my mind.

Having it actually out and available for review and purchase is an UTTERLY WONDERFUL FEELING, though.  This book looks great!  It's a great story, too.  Please check it out.

I can provide semi-advance review copies IF you have a blog or other public forum in which to review.  Let me know.
Posted by Claire Youmans Author at 10:47 AM No comments:


Once upon a time, the option of independent publishing was a new, bright, shiny good thing.  Part of the reason that was true was the advent of publishing in eformats for ereaders.  That was available through, no surprise, Amazon.   There were also pay-for-play bound book publishers that were truly vanity presses.  Lots of them, generating very few sales.  They are great for their niche markets -- those who want to publish memoirs and poetry, mostly, and realize that their market is very small.

Then CreateSpace came along, from, guess who?, Amazon.  This allowed wider distribution, but again for a niche market, because actual bookstores couldn't order without a lot of fuss and bother that they're not willing to undertake.

Now we have Ingram/Spark, which allows distribution through the Ingram catalog, the one that all retailers have right there.  Of course, their site is un-user-friendly and they charge -- more pay-to-play.  They are reputed to have better physical retailer distribution and better international distribution.

And there are still vast numbers of firms marketing their services, again without real distribution or marketing options.

I have no idea.  After spending days trying to deal with Amazon/CS and trying to figure out IS's impossible website, I think I can say The Toki-Girl and the Sparrow-Boy, Book 4, Uncle Yuta has an adventure is OUT, and will appear at Kobo, iTunes and all the other eformat retailers at some point.  Soon, I hope.  Kindle Version is here.  The hard copy version should appear linked to it shortly. t Ingram print versions will appear soon.  A physical book store will have their catalog.  I can't find it online.  Maybe you can.

This utter BS is STILL going on.  I now think of publishing any more books (and there will be several just in this series) posthumously and letting my heirs handle all this nonsense.

Posted by Claire Youmans Author at 11:21 AM No comments:

Uncle Yuta Has An Adventure is OUT -- sort of

This is what they call a "soft launch."  In fact, it's almost mushy.  There's no printing a thousand copies and then sending out a bunch for reviews, do a lot of advertising, and then do a "hard launch" with a lot of publicity and available reviews, and deliveries to brick and mortar stores.

Nope.  Not any more.  It's Print on Demand, so you only get copies once the title is all set up and released, and THEN you can do the other things.  It would be great if it worked.

Ingram/Spark has the title ready to roll.  I've even ordered some copies for August Birthday Week and publicity purposes.  It's quite possible to order a hard copy, and also to get eformats through them or your regular retailer -- though that might take a few days.  The idea is the IS has better international distribution, so getting all e-formats from all distributers should be easy! CreateSpace and Kindle theoretically have the best domestic distribution.

BUT THEY ARE ALL SCREWED UP and I've spent the last hour and a half trying to unscrew it.  We'll know in a couple of days if it is possible to unscrew CS and Kindle, though Kindle e-copies are, I think, best as I can check it, available right now.

SO...this book follows the model of increasing complexity as the characters grow up and move on in life, despite their special abilities and the way those handicap them.  This one is very exciting!  By 1871, things had changed yet again and continued to change on a daily, even hourly basis.  Women's rights, surpressed by the Tokugawa Shogunate, come to the fore.  There is a brand-new passenger train from Yokohama to Tokyo, plus the freight trains used for mining in Kyushu.  Industrialization and the West's fascination with all things Japanese have led to huge industries supplanting artisans, indentured labor and bad, sometimes brutal, treatment of laborers.  The entire economy has changed.  Japan is showing itself able to meet and surpass the West in technology and take its place as an equal on the world stage.

On top of that, the Meiji regime's goal of meeting with the West as an equal leads to a level of national unification never before seen.  The first of several educational conferences entirely reform the educational system to this end, and Yuta-sensei will be there, in the Eastern Capital of Tokyo, now full of Western dressed people, the new jinrickishaws, carriages and even horse-drawn street cars.  So much to see, so much to do.  Confusion, of course, abounds.

Even among the dragons, coping with all the changes in their own lives and their intersection with humans is a hard row to hoe.  Now little yokai appear, little mischief-making beings who want -- what?

Please do read this book.  It's really fun. I hope you can exercise a little patience with the distribution system for a few days.  This era exemplifies that truth can be ever so much stranger than fiction, and so it is also in the way the current publishing system is working -- or not.


Posted by Claire Youmans Author at 10:01 AM No comments:

The Toki-Girl and the Sparrow-Boy, Book 4, Uncle Yuta has an Adventure, will be out in a week or so in Kindle Unlimited and shortly thereafter hard copies will be available.  After a term in KU, it'll come out in all eformats via their own sites and Smashwords.  Yes, it's taken a month as of today to get it to this place after submitting for formatting, with new proofreading changes happening constantly, in the secret dark, as my sworn enemy, Auto-carrot, takes steps to make mischief out of my sight.  When the hard copy comes out, there will be another announcement.  I don't know if I posted this poem before, but I found it more or less at random, and it seemed appropriate.

I want to live with seasons, all four,
Without too much rain, but plenty of snow,
With a summer hot enough to smell the evergreens while
Berrying in the woods, tending the occasional sport fruit tree, and gathering its gifts.

I want it hot enough for a swim and a lemonade, but not hot enough
To call for air conditioning.
Not dripping damp, yet not too dry,
By the ocean, with a harbor to sail, a beach to walk and storms to watch.

I want wood piled high and starlight reflecting off the snow,
While the stove envelops the house in a comforting blanket of warmth,
Cold nipping my nose and ponds freezing over,
A basket of slippers by the boot tray at the door.

I want a sweater in the morning, with golden light and changing leaves,
Nuts to gather from the ground,
And maple trees.
(OK, that may be too much.)

I want to plant a garden in a cheerful blooming spring,
When seedlings sprout under a cold frame dusted with the last of the snow.
A village on the harbor, with everything one needs,
Close enough to walk or bike or ski, without too many hills.

I want enough tourists to keep things interesting, and a
City just a bit inland, not too far, to house the things
That won’t fit picturesquely in a village.
I would fit in there just fine. 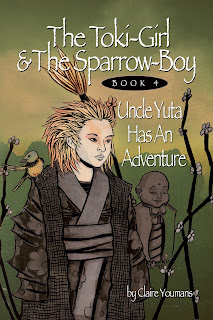 Posted by Claire Youmans Author at 5:26 PM No comments: