Mist on the lake;
The snow on the ground glistens.
Not spring; not just yet. 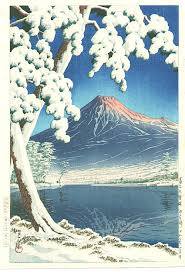 Fortunately, we're supposed to be getting Winter back next weekend.  I haven't skiied enough yet.
Book 4: Uncle Yuta has an Adventure is out for beta reads.  I don't have quite enough time because of the ESL teaching.  Maybe I can get significant skiing done from now until the areas close at (about) the end of March, but it's hard to manage more than one day a week right now.

Since Book 4 is out of my hands I am thinking about Book 5.  I like to end on turning points rife with possibilities.  I like to end before I am quite ready.  I like to know what happens next, at least in part.  It's things in the current book that lead to the next.  I want to work it out now, and put in clues when I rewrite, if they aren't already there.  It's going to be fun!

Posted by Claire Youmans Author at 11:32 AM No comments:

I'm writing so hard that I barely acknowledged Lunar New Year!  I made some Chinese Almond Cookies.  My recipe is authentically Chinese and uses vegetable shortning instead of lard. I've seen recipes that recommended butter, but I think that would change the flavor significantly.  Not that it wouldn't be GOOD.  They just wouldn't taste like Chinese Almond Cookies to me.

So, happy new year, everyone.  And whether the groundhog saw its shadow for you or not, may it been a wonderful one.  We had mixed results here.  It was hazy and while one could see shadows, they didn't really manifest until later in the day.  It's been very spring-like since then.  Yesterday was a perfect spring-skiing day.  First rain and then snow are to move in tonight, but NEXT week, late, it's likely we'll get a real humdinger and winter will be back.

I've finished the first draft of Book 4, Uncle Yuta has an Adventure (working title; but I am SO BAD at titles).  I let it rest a week while I played catch-up in parts of Heisei (the current era) before returning the the Meiji era to rewrite and review before dispatching the manuscript to Beta readers.  It's a great story!

The Meiji era wasn't all fun.  The speed of change and the nature of the changes meant that everyone must have felt like rocks shaken in a jar.  Still, good and real life went on.

I am still sick of social media and don't spend much time with it, not even the mandatory writer's duty things like this.  I never know what to say!  And 9 billion others are doing it, too.  I don't have time to read all the lists I am on, much less add more.  I want to write my books.

Back to work I go.  You WILL like this book.  It's exciting and funny, discoveries abound, friendships deepen, and then there's that Adventure.


Posted by Claire Youmans Author at 10:50 AM No comments: