Here's the link to the review at Online Book Club.

"The author definitely does a good job accurately depicting traditional Japanese culture and making it easy to understand."

Check it out.  Then go buy books that will delight.
The Toki-Girl and the Sparrow-Boy Book Two Chasing Dreams 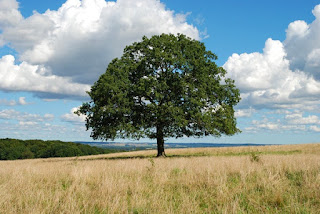 The light turns golden.
Fall is in the morning air.
Summer afternoons.


Posted by Claire Youmans Author at 9:50 AM No comments:

We have a wildfire here where I live.  It's contained, and in the last stages, but it was very frightening.  It was so close to occupied areas, on the very edge of the developable strip (Forest Service land surrounds us) the firefighters (AWESOME) gave it all they had.  It's not a BIG fire like they have in Washington, but a very dangerous one, because of its location.  I had an endless parade of helicopters over my house at a very low altitude as they came in to scoop up water from the lake.  We were packed to evacuate, but we didn't have to -- they did, four blocks or so over.
Here are pictures from my back porch, from shortly after it was spotted on Sunday to midday Monday.  It is cloudy today and it sprinkled a tiny bit this morning.  There are still smoke plumes rising.  Can you see the flames?  Whole trees were torching.

I wondered about wildfires in Japan.  I've never heard of one, though urban fires were gigantic disasters, and the firefighting systems in urban areas were well organized and well run.  Then I heard a giant typhoon is ravaging Japan right now.  Some 200,000 people evacuated.  Huge power outages. Massive damage, and one person missing.  My guess it's too wet for wildfires to take hold.  But every place has something.  I wish them well.

The Toki-Girl and the Sparrow-Boy Book 2 Chasing Dreams is getting MORE great reviews!  Get it now, and add yours.  I'm about to start Book 3! 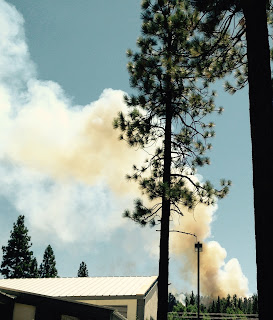 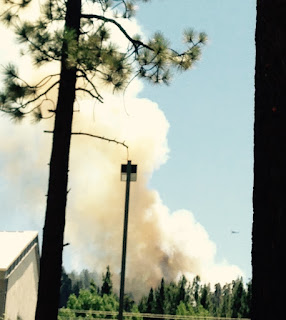 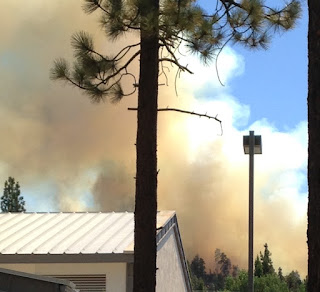 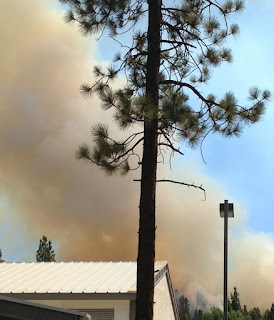 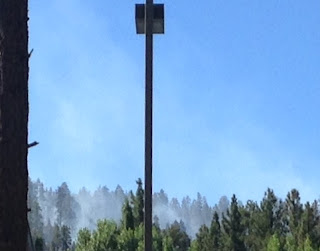 Posted by Claire Youmans Author at 12:03 PM No comments:

Today is a break day from camp, and while I thought I'd spend the day resting and I am, I also began pulling together the outline for Book Three, as yet untitled, so I can begin the draft as planned as soon as the summer program is over.  Cool stuff happens!  New monsters! 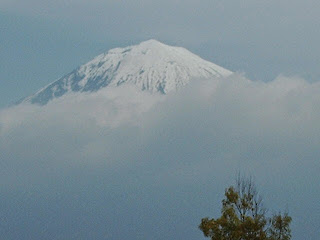 Posted by Claire Youmans Author at 1:57 PM No comments:

For the next week or so, I am going to SUMMER CAMP!  Yay! Naturally, this means my internet access will be restricted, so no blogging or other updates for a bit.

This is a camp specifically for people with disabilities, and we will be doing lake-related activities, including boating, my specialty.  You want to do it?  We will make it happen!  And we will have FUN doing it!

Anyone who is interested in either volunteering for or participating in these fabulous programs, PM me and I will give you the contact information.  This is a wonderful program.  I can't think of very many ways to spend my little vacation than doing this!

Have a wonderful week, everyone.  I plan to.
Posted by Claire Youmans Author at 10:25 AM No comments:

Here's the link to a video interview done in LA recently for Ankh Entertainment, by Osiris Munir.

It's pretty cool.  There are also updates on The Toki-Girl and the Sparrow-Boy's  website.  Busy day! 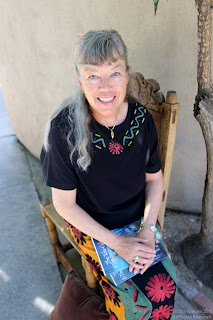 This picture was taken in LA, in a lovely B & B on Laurel Canyon, just north of Sunset Blvd.  Fun neighborhood, fun time!
Posted by Claire Youmans Author at 2:25 PM No comments:

A haiku is an instant, captured.

Summer on the lake.
Sunshine glints on flat water.
Another great day!

The Toki-Girl and the Sparrow-Boy Book 2 CHASING DREAMS is getting great reviews!  Click and check out!

Posted by Claire Youmans Author at 3:38 PM No comments:

The Toki-Girl and the Sparrow-Boy, Book 2 Chasing Dreams is getting FANTASTIC reviews.  Go see.  And while you're there, buy the book and write your own!

I may not be able to keep this up -- in fact, I am still volunteering in a disabled summer sports program until Labor Day, but I want to work on some poetry as Book 3 comes together in my head.  Next week, I go to CAMP!  The best part is, since I live nearby, I get to come home at night.  No tents, no bugs, no dirt.  Nice!

Here's a haiku for you, in the classic style connecting a natural event to an emotion.

I find joy in the morning
as the sun shines on the Butsudan doors.


(In case you don't know, a Butsudan is a Buddhist altar.)
Posted by Claire Youmans Author at 9:56 AM No comments:

Birthday cake! Another review! A haiku!

Today's my birthday and I reflect now and again on how much I enjoy my life now.  The Toki-Girl and the Sparrow-Boy series is doing so well, the reviews are so good, and I think I have found my sea monster for Book 3!

"A wonderful continuation of Azuki and Shota's story...begs to be read aloud..."

Read the rest of the review at the link above.

The cake is a walnut rum cake, glazed with a simple whisky (in this case, rum) glaze.  I spiked it, too.  It's sliced and in a container so it'll last.  IT IS SO DARNED GOOD! 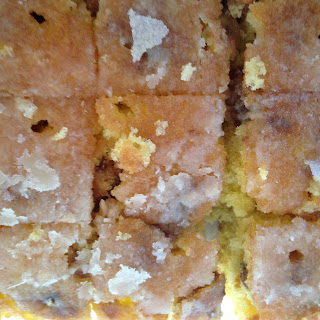 There was also breakfast, from my garden. 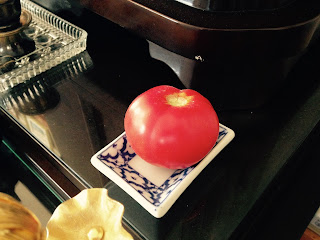 
Posted by Claire Youmans Author at 11:37 AM No comments:

I was in LA yesterday for an interview with Osiris Munir of FifteenMinutesThe Show -- the link will be up shortly.  GPS is liar; the drive took double what GPS said, and half again what I thought it would.  Traffic is horrid, public transportation is a joke.  We need to do what's done in Europe and make lots in remote areas and PROPER transportation that CONNECTS in the city, and actually goes places people need to go.

Check out reviews for The Toki-Girl-Sparrow-Boy Book Two Chasing Dreams!  From Bree Wolfe, author of Fireflies and Butterflies, on Amazon and Smashwords:


"At a quick pace the adventure moves forward, making you turn page after page, reading long into the night.  Highly recommended!"

Posted by Claire Youmans Author at 10:06 AM No comments: